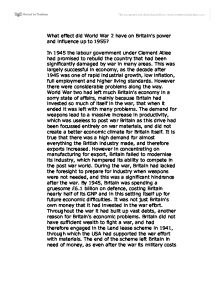 What effect did World War 2 have on Britains power and influence up to 1955?

What effect did World War 2 have on Britain's power and influence up to 1955? In 1945 the labour government under Clement Atlee had promised to rebuild the country that had been significantly damaged by war in many areas. This was largely successful in economy, as the decade after 1945 was one of rapid industrial growth, low inflation, full employment and higher living standards. However there were considerable problems along the way. World War two had left much Britain's economy in a sorry state of affairs, mainly because Britain had invested so much of itself in the war, that when it ended it was left with many problems. The demand for weapons lead to a massive increase in productivity, which was useless to post war Britain as this drive had been focussed entirely on war materials, and did not create a better economic climate for Britain itself. It is true that there was a high demand for almost everything the British industry made, and therefore exports increased. However in concentrating on manufacturing for export, Britain failed to modernise its industry, which hampered its ability to compete in the post war world. During the war, Britain had lacked the foresight to prepare for industry when weapons were not needed, and this was a significant hindrance after the war. By 1945, Britain was spending a gruesome �6.1 billion on defence, costing Britain nearly half of its GNP and in this setting itself up for future economic difficulties. ...read more.

Aside from Germany, Britain also looked to increase its potential influence in other parts of Europe. This can be seen clearly in its transatlantic alliance with the US, which enabled Britain to maintain a great power status in the post war world. Britain also wished to enhance its links with Europe in order to better Britain's global power base. However despite these wishes it rejected the idea of the European Defence Community on the grounds that a greater European commitment might undermine Britain's other global responsibilities. During the Second World War it had seemed that Britain might emerge with a much-reduced empire. Although a major British war aim was the preservation of its empire, both its primary allies, the USA and USSR were in principle opposed to colonialism. It even appeared, immediately after the war, that Britain was preparing to abandon the empire. It gave independence to both India Pakistan and Burma in 1947, even evacuating Palestine in May of that year. These were not really seen as losses for Britain as they were costly and not excessively rewarding. However the post war labour government was clearly committed to developing the role of other significant colonies that would hopefully keep Britain's status as a great power. This could potentially be achieved through the commonwealth, which Britain hoped to use as a union of states that would each offer some protection to Britain and each other, whilst providing strategic advantages on a global level. ...read more.

By 1952, both Britain and the Soviet Union had successfully tested their weapons, presenting themselves as superpowers. Britain's ability to develop its own nuclear capability was essential, as the threat of mass destruction from both east and west in the cold war created a power balance so great that a strange stability was created in international relations. Nuclear weapons had become the ultimate deterrent, and with the possession of these established Britain firmly in nuclear terms at least, as a 'great power'. Despite the many problems of this period, there are many positive aspects that I would argue, leave Britain in a position of relative power. Although saddled with huge war debts to the USA, its economy was still one of the healthiest in Europe, manufacturing as much in 1951 as France and West Germany combined. Britain had succeeded in economically developing parts of its Empire that brought in much needed revenue, such as oil in the Middle East. For much of its empire it had allowed independence, freeing itself of tiresome commitments whilst guaranteeing a more friendly relationship with these former colonies. It had a strong relationship with the USA that had been cemented by NATO, securing America as an extremely beneficial ally. Britain also had begun to develop nuclear weapons, placing it in position as a nuclear superpower alongside the USA and USSR. Despite all this, Britain did still have many problems concerning its economy, empire and status which was still fragile, and was therefore not so much a superpower, rather a small step ahead of other European powers defeated in the war. ...read more.