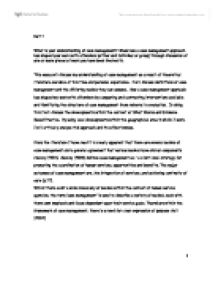 What is your understanding of case management? Show how a case management approach has shaped your work with offenders (either and individual or group) through discussion of one or more pieces of work you have been involved in.

Risk management of offenders is instrumental in the Merseyside / DeMontford case management model in line with the national agenda. The assessment of risk at the pre-sentence report stage is a major influencing factor in case management, however this will be covered in depth in part two of this assignment. As such I will focus on the case management model I am using with an offender, to example the above model of what is seen as good practice within case management. I am currently working in a pre and post release division of the National Probation Service and am supervising offender 'A' on a six-month licence, he has a past history of violence, sexual assault, black mail, drink driving plus lesser offences ranging over a twenty year period. He is 48 years old and states he is gay and is HIV positive, 'A's presenting problems or issues relating to his offending are connected to his abuse of alcohol which acts as a disinhibitor and he states is as a result of bereavement. Assessment As stated above the referral stage of the process will be discussed latter, as such I will discuss the assessment methods I have used to assist in preparing a supervision plan for 'A'. James Maguire suggests that we have moved on from simply asking 'what works' we should now be asking 'what works when, where and with whom Maguire [2002]. As no OASys assessment existed for 'A' my first priority was to assess his needs and those of the public who have a right to be protected, in doing this risk scores were calculated and used to help provide an accurate evaluation of 'A' and to identify static and dynamic factors which may influence future offending. Maguire's view that assessment needs to be tailored to meet the individual need was apparent in this case, having complex and multi faceted issues which need to be addressed in order to prevent recidivism by 'A'. ...read more.

In the week of writing this essay he has been arrested for false imprisonment and indecent assault with the charges delayed whilst the police decide whether or not to bring the charges. Whilst I believe 'A' has benefited from the cognitive work and has been able to use some of the problem solving techniques, 'A' however believes his progress to be much further on than do I. In asking him what he believed has helped, from a case management perspective he informed me he thinks more about the consequences but still finds it hard not to drink and once drinking falls into old habits. Throughout this period of supervision I have asked 'A' if he thinks it has helped him, if there was something, which might have benefited him if done differently, if he felt the contact to be to intrusive as it was kept at weekly appointments for the full period of the licence. Surprisingly 'A's answer to all of the above questions were he was happy with the work done and the level of contact, as he stated it helped him to focus and prevented him from drinking when he new he had an appointment. In conclusion and as a foot note to the above regardless of the work done with 'A' he latter when on to lose his accommodation as a result of his behaviour towards other tenants also to commit a further offence against a young male in a hostel threatening him and was charged and held in custody. As a result of this and the other offences his licence was revoked and he is now awaiting sentence in custody, with further charges pending it is almost certain he will receive a further custodial sentence. It is evident the interventions used have not worked and regardless of the efforts made 'A' has remained rooted in a recidivist life style. It may seem case management models regardless of content will need to continue to be re-evaluated and effective practice re-examined in order to ensure best practice remains a watchword for working with involuntary individuals. ...read more.