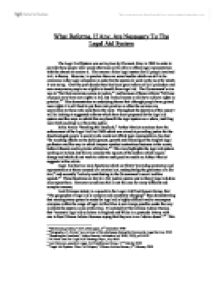 What reforms, if any, are necessary to the legal aid system

What Reforms, If Any, Are Necessary To The Legal Aid System The Legal Aid System was set in place by Clement Atlee in 1949 in order to provide those people who would otherwise not be able to afford legal representation with the chance to receive it. This means a fairer legal system for all people involved in it, in theory. However, in practice there are some hurdles which are still to be overcome in the legal aid system in order for the system to work in the way for which it was set up. Over the past decade there has been great reform of civil procedure and now many more people are eligible to benefit from legal aid. The Government's aim was to "facilitate seamless access to justice,"1 and because of these reforms "Millions of people now have new rights in law, but limited means or ability to achieve rights in practice."2 This demonstrates an underlying theme that although people have gained more rights it is still hard to put them into practice as often the services are unavailable to those who need them the most. Throughout the duration of this essay I will be looking at suggested reforms which have been proposed for the legal aid system and the ways in which this may benefit the legal system as a whole, instilling more faith and trust in it from the public. In his Article "Breaking the Deadlock," Arthur Marriot examines how the enforcement of the Legal Aid Act 1949 which was aimed at providing justice for the disadvantaged people ...read more.

Because of this, the report "Legal Aid: A Market-Based Approach to Reform,"12suggests reforms which could be made in order to minimise the costs of such cases. This paper sets out that all high cost cases must adhere to a "very high cost case best practice team protocol."13 This protocol encompasses ideas such as correct case planning, taking client's instructions, selection and instruction of experts and even the sharing of costs with the co-defendants legal team. I agree that this is an area of the legal aid system which does indeed need reform. The money which is sometimes wasted in these cases could instead be used for people who need legal aid but cannot receive it due to the system's inability to budget its money efficiently in these very high cost criminal cases. In the Government paper "Doing Law Differently," Lord Falconer reinforces the idea that there is a need to lower the expenditure and become more efficient within the Legal Aid System. He states that "The legal aid system is a pillar of our justice system, but the current levels of expenditure are unsustainable."14 This further proves that there is a need for reform within the legal aid system, this statement stresses the urgency of the situation and that something must be done to lower the amount of money which is often wasted in certain areas of the system. Lord Falconer goes on to explain the rise in costs which have dramatically risen from �1.5 billion in 1997 to �2.1 billion in 2006. ...read more.