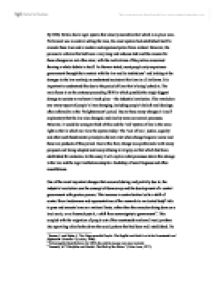 What was the most influential period in the development of the criminal law and the associated institutions.

By 1850, Britain had a legal system that closely resembles that which is in place now. Parliament was in control setting the laws, the court system had established itself to execute these laws and a modern and organised police force existed. However, the process to achieve this had been a very long and arduous task and the reasons for these changes are not often clear, with the motivations of the parties concerned forming a whole debate in itself. As Brewer stated, most people only experience government through their contact with the law and its institutions1 and looking at the changes in the law can help us understand society at this time in all its forms. It is important to understand this due to the period of time that is being looked at. The main focus is on the century proceeding 1850 in which possibly the single biggest change to society as we know it took place - the industrial revolution. This revolution saw every aspect of people's lives changing, including people's beliefs and ideology, often referred to as the 'Enlightenment' period. Due to these many changes it is self explanatory that the law also changed, and also by some un-normal processes. However, it would be wrong to think of this and the 'old' system of law in the same light as that in which we view the system today. The 'rule of law', justice, equality and other such fundamental principles did not exist when change began to occur and these are products of this period. Due to this fact, change was problematic with many proposals not being adopted and many refusing to let grip on that which had been established for centuries. ...read more.

By 1800, over 200 offences could result in the death penalty. Lea tells us that between 1774 and 1776, records show that people were even hung for 'destroying silk on a loom' and swearing a false oath7. However, this increase in the 'Bloody Code' had the opposite effect to that which it was intended. Executions were more than just the hanging of someone who was believed (by those in power) to have committed a serious crime, it was also the opportunity for a demonstration of power, aiming to encourage obedience of the law. Executions were a spectacle to which everyone was invited to see, and often encouraged to participate with excitement. People would give speeches, sing and look on with amazement and awe. In London, the condemned were forced to take a three mile walk from the prison in Newgate to the gallows at Tyburn, where church bells would ring along the route, only to end up on a raised platform, humiliated in front of many onlookers. To the ruling classes, this procession and ceremony was as important as the execution itself, a symbolism of power - the condemned are not just killed, but humiliated and shamed. However, this should not be viewed as the harshness and brutality being carried out by evil men on a power trip caused by fear. This was the only way that these men understood how to deal with people who had chosen to break the law set by the King, and the elite still had a strong symbolic link and loyalty to the monarch. This humiliation was made worse in 1752 with the introduction of the "Act for the Better Preventing of Horrid Crimes of Murder" which allowed the Surgeons Guild to commandeer the bodies of the executed for whatever they saw fit, including dissection and research. ...read more.

As democracy was developed, so must the law. With the increase in complexities of people's everyday life, the governance of society must develop to fit in with these changes. No longer was a system of ad-hoc principles and personal law suitable to the new industrial towns and cities and regulation and detection needed to be taken out of the hands of the individual. The developments were problematic with people fearing the loss of control, however it remains that changes were acceptable and so a matter of time was required for people to get used to the forward thinking ideas. These changes also show us that not everyone can be happy with any change made, and during this period it began to be accepted that it is important to please the majority most of the time. 1 Brewer, J. and Styles, J. "An Ungovernable People: The English and their Law in the Seventeenth and Eighteenth Centuries" (London, 1980) 2 Following the Great Reform Act 1832, the middle classes were also included 3 Foucault, M. "Discipline and Punish: The Birth of the Prison" (Allen Lane, 1977) 4 See Fielding, H. "Enquiry into the Late Increase of Robbers" (1751) 5 By masses I mean the working class, and up to 1832 the middle classes. 6 Whitehall Evening Post, 17th January 1749 taken from Rawlings, P. "Crime and Power: A History of Criminal Justice 1688-1988" (Longman, 1999) 7 See Lea, J. "Law, Ideology and the Gallows" (2004) from http://www.bunker8.pwp.blueyonder.co.uk/history/36804.htm 8 Formed by the Metropolitan Police Act 1829 9 See the exploits of Jonathan Wild, the so called ' Thief Taker General' ...read more.