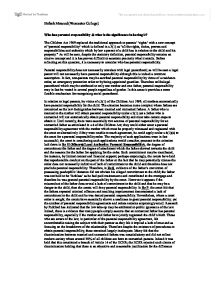 Who has parental responsibility &amp; what is the significance in having it?

a manner which appears more favourable to the unmarried fathers as it constitutes a step towards equalising their position with mothers and married fathers. s.111 of The Adoption and Children Act 2002, which amends s.4 of the Children Act, states that an unmarried father may now acquire parental responsibility automatically upon jointly registering the childs birth with the mother; this is assumed not only to imply the mothers agreement but allegedly demonstrates "an appropriate degree of commitment to the child." For those who do not qualify automatically, the 2002 Act retains the existing provisions for court orders and parental responsibility agreements. These reforms, however have not been received well by all. Wallbank, for instance, is rather cautious. The new rules are based on the idea that the commitment which registration allegedly demonstrates is deserving of reward. However, Wallbank contends that the reforms in fact have the effect of "diluting" the degree of commitment needed by unmarried fathers by setting the demonstration of commitment at "the low level of joint registration." It precludes any close scrutiny of the fathers capacity to act responsibly in an ex post facto manner, as was possible under the previous law. However it is arguable that in fact the previous level of commitment which had to be demonstrated was in fact set at a ...read more.