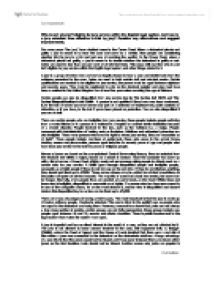 Who is and who isn't eligible for jury service within the English legal system. And how is a jury selected. How effective is trial by jury? Consider any alternatives and suggest improvements.

Another reason why juries are popular is that they do not have to agree with the judge. Even if the judge tells the jury that the defendant has no defence they can acquit the accused, something similar happened in R. v. Mckeena. In this case the jury was pressurised by the judge, the defendants conviction was quashed on appeal because the judge at the trial threatened the jury that if they did not return with a verdict within ten another minutes they would be locked up for the night. A jury can refuse to operate a law which they feel is unjust, this happened in a case of Clive Ponting (1985), he admitted his guilt but he did the crime for the good of the country. A jury may not come up with a legally correct verdict every time but a just one. Lord Devlin once said that the jury is "the lamp that shows that freedom lives" due to cases like Ponting. There is also public confidence in the use of juries. There are also many disadvantages of having a trial by jury. Although jury selection, in theory, is a random selection process, often certain groups of people are not fully represented, these include younger people and people of ethnic minorities. The Runciman Commission (1993) on the criminal justice system, proposed that in some cases, if random selection did not provide a multi-racial jury, then the jury should be deliberately chosen to make the jury a cross-section of society. ...read more.

It would be very expensive. Another alternative could be to use a judge and two lay assessors, it would eliminate the slowness and cost of using a jury as well as keeping in public involvement. All three (two lay assessors and the judge), eliminating problems of lack of understanding could make the decision. The Judge would put in the legal input and the lay people would consider the facts. It would be quicker and cheaper compared to trial by jury, however, there would not be as larger cross section of society involved. The final alternative could be to have a judge and a mini-jury. This system would bring down the cost, by having less jurors, there could still be personal bias though. This technique is used in America in less serious cases. There are still disadvantages to all of these alternatives. In conclusion, the people that finally do the jury service are randomly chosen, however, the people in a jury do not often represent a fair cross section of the public. This could cause bias. Trial by jury should be a fair trial, but jurors can be a subject to bribes and they can be intimidated in some cases causing bias. The number of people/groups that do not have to do jury service could be seen as very large, the people that end up doing jury service are often middle class, middle aged and middle minded so to speak. The most viable alternative to trial by jury is having a Judge and two lay assessors as the public is still involved, its cheaper and faster. Law Coursework Carl Gelibter ...read more.