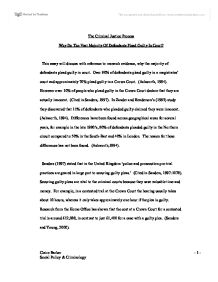 Why Do The Vast Majority Of Defendants Plead Guilty In Court?

The Criminal Justice Process Why Do The Vast Majority Of Defendants Plead Guilty In Court? This essay will discuss with reference to research evidence, why the majority of defendants plead guilty in court. Over 90% of defendants plead guilty in a magistrates' court and approximately 70% plead guilty in a Crown Court. (Ashworth, 1994). However over 10% of people who plead guilty in the Crown Court declare that they are actually innocent. (Cited in Sanders, 1997). In Zander and Henderson's (1993) study they discovered that 11% of defendants who pleaded guilty claimed they were innocent. (Ashworth, 1994). Differences have been found across geographical areas for several years, for example in the late 1980's, 80% of defendants pleaded guilty in the Northern circuit compared to 50% in the South-East and 40% in London. The reason for these differences has not been found. (Ashworth,1994). Sanders (1997) stated that in the United Kingdom 'police and prosecution pre-trial practices are geared in large part to securing guilty pleas.' (Cited in Sanders, 1997:1078). Securing guilty pleas are vital to the criminal courts because they save valuable time and money. ...read more.

at a fairly late stage.' Cracked trials are a problem for the criminal justice system as they waste limited resources, particularly judicial time, court time and public money. They are also a problem for witnesses and victims as they may cause anxiety and inconvenience. The use of plea bargaining and charge bargaining in Britain's legal system is used to influence defendants to plead guilty, and to try and reduce the number of cracked trials. (Ashworth, 1994). One reason why a defendant might plead guilty is because plea bargaining has taken place between their counsel and the judge, and they have been offered a sentence discount. This is where the defendant admits to the offence and therefore is given a reduction in their sentence. (Belloni & Hodgson, 2000). The discount is usually about one third of what the defendant would have got if they were convicted on a not guilty plea. (Ashworth, 1994). Ashworth (1994: 266) summarises plea bargaining as 'trading a chance of acquittal for a lower sentence than would have been received in the event of a conviction.' However research carried out in the early 1980s interviewed 129 magistrates and discovered that two-thirds of them considered a guilty plea to have little or no impact when sentencing. ...read more.

where the counsel told the defendant that the judge had indicated that a guilty plea would result in a non-custodial sentence, and a not guilty plea would result in a custodial sentence if he was convicted after trial. The Court of Appeal stated that this placed unacceptable pressure on the defendant when choosing how to plea. (Ashworth, 1994). We can see that the criminal court procedures seem to follow the crime control model of criminal justice. Due to the high rate of guilty pleas the vast majority of imperative due process protective measures are not put into action. As a result of this, evidence is not thoroughly examined, witnesses are not cross-examined, and the reasons why evidence has been excluded does not come into light. (Sanders & Young, 2000). As Sanders and Young (2000:397) stated 'the prosecution is not obliged to prove its case beyond reasonable doubt before an impartial tribunal.' This is because the defendant is condemned the moment he/she says the word 'guilty.' (Sanders & Young, 2000). The high rate of guilty pleas gives the prosecuting authorities hardly any reason to make sure that only appropriately prepared cases are tried in court. Therefore a rise in the number of weak cases that are prosecuted is expected, and also in the number of wrongly convicted innocent people. (Sanders and Young, 2000). ...read more.

A conclusion - perhaps drawing on Ashworth's essay - would enhance this essay.

Overall, a good consideration of the key essays in this field.