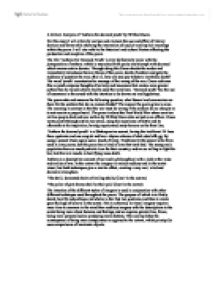 A Critical Analysis of 'Anthem for doomed youth' by Wilfred Owen.

A Critical Analysis of 'Anthem for doomed youth' by Wilfred Owen. For this essay I will critically analyse and evaluate the use and effect of literary devices and forms while showing the interaction of explicit and implicit meanings within the poem. I will also refer to the historical and cultural factors affecting the production and reception of the poem. The title 'Anthem For Doomed Youth' is very deliberately ironic with the juxtaposition of anthem, which is associated with praise and triumph with doomed which means certain demise. Through doing this Owen shocks the reader and immediately introduces them to theme of the poem, death of soldiers and gets the audience to question the war; after all, how can you pay tribute to inevitable death? ...read more.

The answer the poem gives is none. The meaning it conveys is that the war must be wrong if the soldiers die so cheaply as to not receive a proper burial. The poem is about the First World War where over ten million people died and was written by Wilfred Owen who served as an officer. Owen wrote poetry through out his war years, using his experience of battle and its aftermath as his inspiration, having experienced many horrors on the front line. 'Anthem for doomed youth' is a Shakespearian sonnet, having the traditional 14 lines three quatrains and one couplet and has a rhyme scheme of abab cdcd effe gg. ...read more.

'The shrill, demented choirs of wailing shells;'(line7 in the octave) 'The pallor of girls brows shall be their pall;'(line4 in the sextet) The intention of the different styles of imagery is used in conjunction with other different techniques used throughout the poem. The purpose of which is to firstly shock, horrify and perhaps overwhelm in the first two quatrains and then to create great feelings of sorrow in the sextet. This is achieved, as visual imagery requires more time to summon in the mind then auditory imagery with the descriptions in the sextet being more about humans and feelings and so requires greater time, focus, being more personalised so producing more distress. This accomplishes the consequence of being more conspicuous as apposed to the octave, which principally uses comparisons of inanimate objects. ...read more.