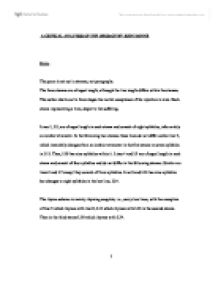 A critical analysis of the message by John Donne

A CRITICAL ANALYSIS OF THE MESSAGE BY JOHN DONNE Form: The poem is set out in stanzas, not paragraphs. The three stanzas are of equal length, although the line length differs within the stanzas. The author charts out in three stages his mortal acceptance of the rejection in love. Each stanza representing a time, depict to the suffering. Lines 1, L2, are of equal length in each stanza and consist of eight syllables, inform ably an iambic tetrameter. In the following two stanzas these lines do not differ unlike line 3, which invariably changes from an iambic tetrameter in the first stanza to seven syllables in L11. Then, L19 has nine syllables within it. Lines 4 and L5 are of equal length in each stanza and consist of four syllables and do not differ in the following stanzas. Similar are lines 6 and L7 except they consist of three syllables. Line 9 and L16 has nine syllables but changes to eight syllables in the last line, L24. The rhyme-scheme is mainly rhyming couplets; i.e., every two lines, with the exception of line 3 which rhymes with line 8, L11 which rhymes with L16 in the second stanza. ...read more.

The speaker uses the word "fashions"(L4), relating the reader to a society of fashion and civil mannerisms, of the 17th Century. "Passions", (L5), relate to the emotions of persons but at the time Donne wrote this poem, sexual passions where thought of as very sinful. Donne through his love of poetry opened the reader up to a new dimension to poetry of real love. He wrote in a metaphysical sense of passion and emotion and feeling of love. In the second stanza (L1), he writes "send home my worthless heart again", which incorporates the pain he suffers. Donne carries on to descriptively show us his spirit beginning to fight back, almost in 'jest', which, in (L12) Donne accuses his misspent love "to make jestings" of his heart or love. He instinctively follows these accusations with L14 and L15 which strengthen his claim to being the receptor of lies and at the same time a light begins to glisten through the text of his truthful character. Finally, the third stanza relates both the heart and eyes to seeing through his perpetrator of pain and false love. By being fully whole again, the speaker may also be happy; may laugh and joy (L19). ...read more.

Donne's incredibly clever use of conceits throws him to the forefront of metaphysical poetry of the 17th Century and his unconventional play on words took him into a new era of poetry, along with the likes of Sidney Philip, Herbert and Milton. Donne broke from the more traditional Sonnets, such as Shakespeare, who was indeed writing poetry at the same time as Donne. Infact, Shakespeare was writing within the borders of the sonnet but pushing this limitation to the maximum, while Donne had the strength of his own convictions to break free and begin a new verse. The love Sonnets of the 17th Century speak mainly of an unobtainable love, or sometimes of a dark lady ready to steer the innocent man of course and into the realms of hell, for passion and sexual love was looked upon as sinful, punishable by God who at this time was held in high places by people. Donne freely talks of his passions and emotions in love and guides one to envisage real love. Tone; The surface tone of the poem presents bitterness and rejection of the speaker's feelings and emotions. The rhythm of this poem tells us a great deal, lightening the tone and speakers feelings with the 4x4 pattern, throwing humour and laughter once again into the speaker's eyes and heart. 1 ...read more.