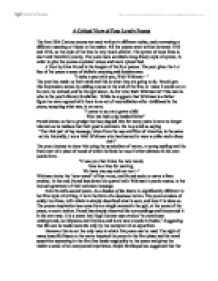 A Critical View of Four Lovely Poems The four 20th Century poems are each written in different styles, each conveying a different meaning or theme to the reader. All the poems were written between 1913 and 1916, so the style of the time is very much similar. The syntax of most lines is short and therefore punchy. The poets have avoided a long dreary style of syntax, in order to give the poems a quicker tempo and more upbeat feel. A Pact by Ezra Pound is the longest of the four poems. The poet gives the 1st line of the poem a sense of definite meaning and decisiveness. "I make a pact with you, Walt Whitman - " The poet has made up their mind and this is what they are going to do. Pound gets this impression across by adding a pause at the end of the line, to make it stand out on its own, be noticed, and be thought about. As for who Walt Whitman is? This man is who is the poet's literary forefather. While he suggests that Whitman is a father figure he never agreed with there is an act of reconciliation after childhood in the poem; accepting what was, is no more. ...read more.

Suggesting that life can be made bearable only by the metaphor of an apparition. However this is not the only way in which this poem can be read. The sight of many beautiful faces on the metro inspired the poem in the first place and the word apparition appearing in the first line lends magicality to the poem and gives the reader a sense of an unexpected experience. Ralph Bevilaqua has suggested that the precise use of the word apparition is meant in French and not English. This would mean that it had a more defined meaning; the exact moment of seeing something for the first time. Given the location the poem is based on (the French Metro) I find this idea highly plausible. The second line does however bring a slightly hazier possibility of its meaning. The words wet black bough give the feel of a bad situation normally associated with the lack of light and damp conditions. There is also the lack of more positive use of vocabulary; using petals instead of blossom or bloom. This is more than likely to be attributed to the hard cutting sound that "petals" gives the sentence. ...read more.

The only pause taken at all is after the first line, where a pause is placed in to give the statement a sense of definicy. This is a ploy we have also used by Ezra Pound. The imagery, like Pound's work, is a crucial part to the poem as a whole, with the descriptiveness of what is seen being the foremost point of the poem. Once again like Pound, and many of their fellow poets of the time, the imagery in 20th Century America is connected with the nature they see all around them. Some might say that Oread describes either a sea or pine forest in comparison with the other,as the description of "pools of fir" lead us to try to connect it with one or the other. However one might also say that Doolittle uses this aptly in creating an image of a midway state, between dream and reality. It is neither a pine forest nor a sea, but also not a dream. This style of imagery involving nature, much like Pound, tore away from the classic Victorian trend. The use of imagery, using particularly nature, began to grow. In 1916 Carl Sandburg wrote Fog, again a poem very short and descriptive of a part of nature. He describes a fog coming in over the harbour in a city. http://www.english.uiuc.edu/maps/index.htm ...read more.