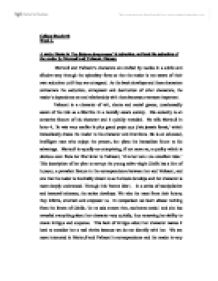 A major theme in 'Les liaisons dangereuses' is seduction, not least the seduction of the reader by Merteuil and Valmont. Discuss.

Colleen Stopforth Week 2. A major theme in 'Les liaisons dangereuses' is seduction, not least the seduction of the reader by Merteuil and Valmont. Discuss. Merteuil and Valmont's characters are crafted by Laclos in a subtle and allusive way through the epistolary form so that the reader is not aware of their own seduction until they are entrapped. As the book develops and these characters orchestrate the seduction, entrapment and destruction of other characters, the reader's dependence on and relationship with them becomes evermore important. Valmont is a character of wit, charm and social graces, unashamedly aware of his role as a libertine in a morally aware society. His audacity is an attractive feature of his character and it quickly revealed. He tells Merteuil in letter 4, 'Je vais vous confier le plus grand projet que j'aie jamais form�,' which immediately draws the reader to his character and intentions. He is an educated, intelligent man who enjoys the present, but plans the immediate future to his advantage. Merteuil is equally as enterprising, if not more so, a quality which is obvious even from her first letter to Valmont, 'il m'est venu une excellent id�e.' ...read more.

The hunt, chase and anticipation are of paramount pleasure for Valmont, not only the conquest, and it is this chase that the reader enjoys following so are directly dependent on Valmont for this. This is a sharp contrast with his letters to Tourvel in which he is sensitive and tender: 'Quoi! L'amour me ram�ne a vos pieds,' This skilful and adaptable style and tone is indicative of his linguistic supremacy and comfort in using language. The fact that Merteuil and Valmont's writing styles shift so frequently makes it difficult for their characters to be fully revealed. Their 'voice' in the epistles shifts according to the addressee which makes a true character portrait almost impossible. This is perhaps one of the most seductive features of the novel because, compared with C�cile who reveals all in her first letter, and Danceney who considers letter writing to be a, 'portrait de l'�me,' both Merteuil and Valmont write with purpose and skill. 'Vous dites tout ce que vous pensez' explains Merteuil to C�cile in letter 105. The reader feels empowered when reading their letters to the other characters, because we understand their purpose and the author's ultimate goal. ...read more.

Valmont is accorded a certain degree of redemption at the end of the novel. He dies by Danceney's sword, and behaves honourably, but does he offer the letters at the and as his last strike in the war with Merteuil, or is it an act of repentance? Although he talks of his sexual endeavours in a mechanical and sensationalist way, his correspondence with Tourvel seems to consume him and he may genuinely love her. An emotional depth is shown in letter 96 when he explains that he wants to enjoy the 'd�licieuses jouissances' of Tourvel. Whereas the cynical Merteuil admits that she is incapable of love, 'Je m'assurai que l'amour, que l'on que nous vante comme la cause de tous nos plaisirs n'en est plus que le pr�texte.' This may offer an explanation as to why Merteuil is silenced like all other characters, and stripped of respect while Valmont dies with some honour; the reader is ultimately seduced by Valmont and not Merteuil. Just as their crafted language illustrates and imposes Merteuil and Valmont's supremacy over the other characters through their letters, it entices and entraps the reader. We are ultimately dependent on them for action, humour and wit as they are the only characters capable of displaying these qualities. ...read more.