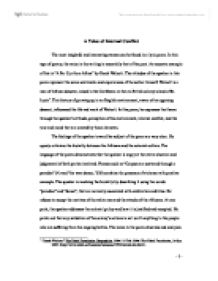 A Voice of Internal Conflict.

A Voice of Internal Conflict The most insightful and interesting stanzas can be found in a lyric poem. In this type of poetry, the voice in the writing is essentially that of the poet. An accurate example of this is "A Far Cry from Africa" by Derek Walcott. The attitudes of the speaker in this poem represent the same sentiments and experiences of the author himself. Walcott is a man of African descent, raised in the Caribbean on the ex-British colony island of St. Lucia1. This history of growing up in an English environment, aware of an opposing descent, influenced the life and work of Walcott. In this poem, he expresses the theme through the speaker's attitude, perception of his environment, internal conflict, and the tone and mood that are created by these elements. The feelings of the speaker toward the subject of the poem are very clear. He openly criticizes the brutality between the Africans and the colonial settlers. The language of the poem demonstrates that the speaker is angry at the entire situation and judgmental of both parties involved. ...read more.

Images of blood and murder are created in the mind of the reader. The absence of compassion is brought up twice in the poem. The bloodshed that he witnesses results from a battle of two forces, which he is internally fighting with. The speaker's tone toward these two groups and what they have done to Africa is expressed by how he portrays them and their actions. The speaker is not necessarily proud of the actions of his African brothers, nor does he accept those of the white colonists. Though both groups are assigned a negative image, the white colonists are portrayed to be more irrational and evil than the natives. The speaker compares the natural hunting activities of the Africans to the murders by colonists, saying "upright man seeks his divinity by inflicting pain" (17). He implies that white men seek a higher position, like that of a God, and to achieve this they kill others. This idea of the tribe being associated with natural laws and the white men correlating with man-made evil powers is carried throughout the poem. ...read more.

(33). The narrator enjoys the civilized culture of the English people, but feels deeply rooted to his African elements of descent. It is the speaker's search for a single social identity that brings to light the theme of the poem. Though the subject of "A Far Cry from Africa" deals with the civilization of foreign lands, the theme is much more individual. It is common to search for a sense of background or heritage, and find a people who you can relate to. However, you can easily find yourself in the middle of two distinct groups. It is natural to want to devote yourself to the people who share your blood, and also easy to identify with the society who you have always known. A combination of the two is hard to find, and Walcott and the voice in his poem have to live torn between two cultures. The speaker conveys tone, mood, and conflict to enhance the theme. Even the title of the poem, "A Far Cry from Africa" supports this sense of feeling lost in a foreign land that could easily be called home. 1 "Derek Walcott." The Nobel Foundation Biographies. 2004. 18 Feb. 2004. The Nobel Foundation, 24 Jun. 2003 <http://www.nobel.se/literature/laureates/1992/walcott-bio.html>. - 1 - ...read more.