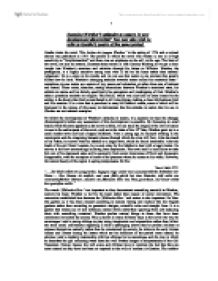 Amine Werther's attitudes to nature. Is any development discernible? You may also wish to refer to Goethe's poetry of the same period.

Examine Werther's attitudes to nature. Is any development discernible? You may also wish to refer to Goethe's poetry of the same period. Goethe wrote his novel "Die Leiden des jungen Werther" in the spring of 1774 and a revised edition was published in 1787. The period in which the novel was written is one in of high sensitivity or "Empfindsamkeit" and there was an emphasis on the self, or the ego. The form of the novel, not just its content, illustrates these trends in 18th Century thinking as we get a close insight into Werther's emotions and attitudes through his letters to Wilhelm. Werther, the protagonist, is a highly sensitive young man who is led by his heart rather than rational judgement. He is a slave to his moods and we can see that nature is one element that greatly affects how he feels. Werther's changing attitudes towards nature reflect his emotional state - sometimes we see nature as a source of joy, peace and relaxation, at other times one of torment and hatred. There exists, therefore, strong connections between Werther's emotional state, his attitude to nature and his beliefs, specifically his perception and worshipping of God. Werther's takes a pantheist outlook on religion. This belief, which was also held to some extent by the author, is the theory that God is manifested in all living things, making a close link between God and His creation. It is a view that is prevalent in many of Goethe's works, some of which will be discussed in the course of this essay to demonstrate that the attitudes to nature that we see in Werther are not isolated examples. To follow the development of Werther's attitudes to nature, it is essential to trace the changes chronologically before any assessment of this development is possible. By focussing on small details which become apparent as the novel unfolds, we can trace the origins of the love of nature we see in the earlier parts of the novel, such as in the letter of the 10th May. ...read more.

Werther's changing attitudes to nature and are reflected in changes in his mood, his situation and his attitude to God. These close connections demonstrate how central nature is to his life as a whole. We see how nature changes from being "eine unaussprechliche Sch�nheit" in the first letter to "ein ewig verschlingendes, ewig wiederk�uendes Ungeheuer" at the end of his letter of 18th August as he is about to leave the area and Lotte. Lotte, the girl he meets and falls in love with soon after his arrival in Wahlheim has a great affect on his moods and consequently on his perception of nature. To get some background of how Werther's human relationships are connected with his moods and nature, it is worth looking at his reflections on women of his past. "Am 17. Mai Ach, da� die Freundin meiner Jugend dahin ist!.....Konnt' ich nicht vor ihr das ganze wunderbare Gef�hl entwickeln, mit dem Herz die Natur umfa�t?" From this quotation, we can expect Werther's relationship with Lotte to have a great affect on his emotional state and attitude to nature. Lotte's naturalness is one of the reasons why Werther is attracted to her. Her naturalness is particularly apparent in the way in which she looks after her siblings, acting as their mother. The mother-child relationship is the most natural known to humankind. To refer back to Goethe's poem "Auf dem See", we can see Goethe making connections between nature and the role of the mother. "Am 16. Junius ....habe ich vergessen, meinen Kindern ihr Vesperbrot zu geben, und sie wollen von niemanden Brot geschnitten haben als von mir. - Ich machte ihr ein unbedeutendes Kompliment, meine ganze Seele ruhte auf der Gestalt, dem Tone, dem Betragen..." The above quotation shows how Werther is moved by Lotte's natural maternal care. However, we also see how nature affects their relationship in other ways and that Werther's attitudes to nature are affected by what is going on in the relationship. ...read more.

Nature is inextricably linked to Werther's heart, his organ of life and feeling. This is shown by the close connections between his moods and attitudes to nature. Nature, such as the changing seasons and the beauty of his surroundings, affects his mood. Likewise how he feels affects his perception of nature. He is so close to nature that it is almost a part of him. As his situations affect his moods, they also affect his perception of nature. Lotte alone has one of the greatest affects on Werther's emotions, making him both extremely happy and full of despair. Therefore, Lotte also has an effect on his attitude to nature. The literature Werther refers to and its themes and moods give us an insight into Werther's changing attitudes to nature. Werther's relationship with nature is extremely intense and close. In intense human relationships, there is a fine line between love and hate - passions can easily change from one extreme to another and affect every aspect of a person's life. The same can be said of Werther's relationship with nature. If it were possible to plot a graph of Werther's emotions, then the trend in the development in his attitudes to nature would follow the same curve as his attitudes to God, his happiness or unhappiness about his relationship with Lotte, the changing seasons, the type of literature he favours and his outlook on life - whether he is cheerful or in despair. All aspects of Werther's life affect and are affected by nature or his perceptions of it. Werther prefers nature not just in term of the countryside as opposed to the town, but also in many other ways - he prefers natural, family relationships to forced business ones, he regards freedom to express natural behaviour and feeling more important to confining to rules and conventions, as is shown in his opinions about bringing up children. It would be impossible to fully understand Werther's personality and appreciate his emotions without following the developments in his attitudes to nature. ...read more.