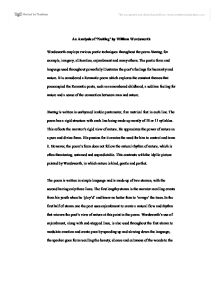 An analysis of 'Nutting' by William Wordsworth

An Analysis of 'Nutting' by William Wordsworth Wordsworth employs various poetic techniques throughout the poem Nutting, for example, imagery, alliteration, enjambment and many others. The poetic form and language used throughout powerfully illustrates the poet's feelings for humanity and nature. It is considered a Romantic poem which explores the constant themes that preoccupied the Romantic poets, such as remembered childhood, a sublime feeling for nature and a sense of the connection between man and nature. Nutting is written in unrhymed iambic pentameter, five metrical feet in each line. The poem has a rigid structure with each line being made up mostly of 10 or 11 syllables. This reflects the narrator's rigid view of nature. He appreciates the power of nature as a pure and divine force. His passion for it creates the need for him to control and tame it. However, the poem's form does not follow the natural rhythm of nature, which is often threatening, untamed and unpredictable. This contrasts with the idyllic picture painted by Wordsworth, in which nature is kind, gentle and perfect. The poem is written in simple language and is made up of two stanzas, with the second having only three lines. The first lengthy stanza is the narrator recalling events from his youth when he 'play'd' and knew no better than to 'ravage' the trees. ...read more.

The powerful imagery employed by the poet further illustrates the concept of nature's beauty. Wordsworth's use of the metaphor 'fairy water-breaks', to describe the stream with its 'sparkling foam', paints a perfect magical picture; like something out of a fairy story. He also uses the metaphor 'fleec'd with moss' as if the fleece is that of a sheep, soft and warm, thus allowing the reader to picture a comforting, cosy scene; a harmonious, perfect, peaceful place, which emphasises Wordsworth's idealised view of nature. However, in reality, nature is not so idyllic - moss, often feeling damp and cold, would not be soft and warm like a sheep's wool; water would not sparkle or resemble the perfect images found in fairytales, but in the speaker's idyllic remembrance any negative thoughts or feelings he may have towards nature are left out. The use of imagery is heightened by the poet's use of sounds: the poet, who has used these images to make nature feel kind, gentle and unthreatening, intensifies their effect by deploying longer vowel and soft 's' and 'f' sounds, such as those found in, 'fleec'd with moss, beneath the shady trees Lay around me scattered like a flock of sheep...' The natural sounds conjure up a tranquil, rural environment where nature is benign, caring and protecting. ...read more.

Compared to the very long first stanza the second and final three line one stands out and immediately draws attention. The significance of this is to show the reader the shift from childhood memories to present day. Wordsworth's choice of language; 'In gentleness of heart; with gentle hand Touch,-for there is a Spirit in the woods', portrays the belief that this is how human kind should treat the beauty of nature. The capital 'S' in 'Spirit' brings about a pantheistic feeling; the Romantic belief that nature is greater than humanity - we are merely passing through. Nature has a 'spirit like humans have a soul; God resides in nature. Wordsworth has linked the poetic techniques in Nutting to create a poem that represents a youth's awakening in the presence of nature, which is personified as 'voluptuous' and virginal. The structure of the poem initially reflects the natural rhythm of nature and is altered to show his destruction. When employed with imagery and other techniques, such as alliteration, tone and the contrasting soft and harsh sounds, the poetic effects and meaning of the poem are further intensified. The reader is drawn into the beauty that surrounds nature; the devastation that mankind can cause to such beauty and the poet's idealised perception of how precious, pure and perfect it is. ...read more.