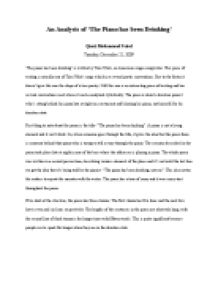 An Analysis of The Piano has been Drinking by Tom Waits.

﻿An Analysis of ?The Piano has been Drinking? Quazi Mohammad Faisal Tuesday, December 22, 2009 ?The piano has been drinking? is written by Tom Waits, an American singer-songwriter. This piece of writing is actually one of Tom Waits' songs which use several poetic conventions. Due to the factor it doesn?t give this one the shape of a true poetry. Still this one is an interesting piece of writing and has several conventions used where it can be analyzed stylistically. The poem is about a drunken pianist who?s sitting behind his piano late at night in a restaurant and blaming his piano, not himself, for his drunken state. First thing to note about the poem is the title- ?The piano has been drinking?. A piano is not a living element and it can?t drink. So, when someone goes through the title, it gives the idea that the poem there is someone behind that piano who is trying to tell a story through the piano. ...read more.

The title of the poem ?And the piano has been drinking? was repeated six times in the whole poem. The language of the poem is primarily very symbolic. He used phrases like: "my necktie is asleep" or "telephone?s out of cigarettes" or "carpet needs a haircut". A necktie cannot sleep, telephones don?t smoke and carpets don?t go to hairdressers. Rather they were used as symbols of displacement of the necktie or the carpet do need a cleaning. Through the poem, the narrator?s stylistic register appears to be informal. However, sometimes even slang was marked in few lines (like, the narrator compares the IQ of the bar owner with a fence post: ?And the owner is a mental midget with the I.Q. of a fence post?). In terms of use of poetic effects, personification was observed quite frequently in the poem. In several lines he mentioned about inanimate objects performing actions which they are not capable of doing. He wrote: "the balcony is on the make" or "the menus are all freezing", eventually which caused category violation. ...read more.