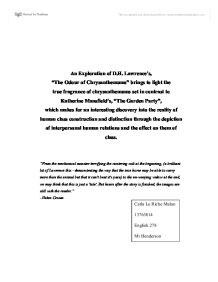 An Exploration of D.H. Lawrence's, &quot;The Odour of Chrysanthemums&quot; brings to light the true fragrance of chrysanthemums set in contrast to Katherine Mansfield's, &quot;The Garden Party&quot;.

An Exploration of D.H. Lawrence's, "The Odour of Chrysanthemums" brings to light the true fragrance of chrysanthemums set in contrast to Katherine Mansfield's, "The Garden Party", which makes for an interesting discovery into the reality of human class construction and distinction through the depiction of interpersonal human relations and the effect on them of class. "From the mechanical monster terrifying the cantering colt at the beginning, (a brilliant bit of Lawrence this - demonstrating the way that the iron horse may be able to carry more than the animal but that it can't beat it's pace) to the un-weeping widow at the end, we may think that this is just a 'tale'. But hours after the story is finished, the images are still with the reader." - Helen Croom An opposition between nature and society creates the central, juxtaposing theme of D.H. Lawrence's, "The Odour of Chrysanthemums". A verification of this theme is evident in Elizabeth's recognition of the absolute differences between her world and the world of her now dead husband, based on her perceptions. Elizabeth is confronted with the shocking reality that she only knew the body of her now dead husband, but never gained knowledge of his true existence; his soul. "The Odour of Chrysanthemums" functions as a depiction of human relations and the effect on them of class, as portrayed by the third person, limited omniscient narrator. The narrator knows what the characters are thinking most of the time, usually focusing on the thoughts of one character. In "The Odour of Chrysanthemums," Elizabeth functions as the protagonist and most of what is told, is through her perspective. ...read more.

When Annie notices the flower which her mother hesitated "laying aside" and instead ironically, "pushed into her apron-band", a gender difference between Annie and John's reactions to chrysanthemums, when Annie excitedly exclaims "Oh, mother!", "You've got a flower in your apron!", is established. Annie proceeds to ask whether she can smell it, murmuring, "Don't they smell beautiful!", in which a contrast between the children's innocent reactions which we may refer to as being positive due to a "lack of life experience" and their mother's cynical remark, "No, not to me. It was chrysanthemums when I married him, and chrysanthemums when you were born, and the first time they ever brought him home drunk, he'd got brown chrysanthemums in his buttonhole." is evident. Ironically, Elizabeth seems unable to distance herself from the negative "odour" of the chrysanthemums, as is suggested by the fact that she stuck the flower into her apron regardless of her connotations associated with these flowers. Elizabeth's response demonstrates the cycle of life as she has experienced and perceived it, as well as a symbolic foreshadowing in the form of the progression of this cycle - death being the final stage, she has not yet experienced, and is thus unable to associate with at this stage. "This story mirrors its title, although the odour is not of flowers, but of the "utter separateness" of life. The use of chrysanthemums in strategic points in the plot further enhances the contrast between life and death, along with the natural beauty and industrial blight." (Amoia 2-3). ...read more.

Chrysanthemums, which bloom in the fall and then die, are symbolic in this story of the fragility of our inner lives (our subjective lives). Elizabeth Bates discovers that inside, she is a person with unique thoughts, passions and fears; her husband was just as much of an individual as she, but one whom she never really sought to know beneath the surface. Their marriage had been dead long before her husband lost his life that night in the mine. In the end, even the vase of chrysanthemums intended for aesthetic beauty within Elizabeth's home is clumsily knocked onto the floor, leaving nothing tangible behind, but an "odour". "The chrysanthemums symbolize a spot of beauty unrecognized by the myopic Elizabeth, just as she never appreciated what she could have had with Walter until it was too late." (Croom 4) "She knew she had never seen him, he had never seen her. They had met in the dark..." The chrysanthemums which had opened Elizabeth's married life had now also closed it. Elizabeth finally smells the true fragrance of chrysanthemums, and it is the odour of resolve, determination and final closure to the season in which chrysanthemums will bloom with bitterness in her life. (Amoia) Contrasting the experience of death in "The Odour of Chrysanthemums" and "The Garden Party", we come to realize that human emotion and experience is universal and similar, regardless of class distinction or barriers manifested by mankind. We, as human beings cannot escape death due to our mortality, thus we must accept that life is our immediate master and that it should be our goal to smell the true fragrance of the chrysanthemums around us, instead of being hindered by our human constructions of class, gender or race barriers. 1 ...read more.