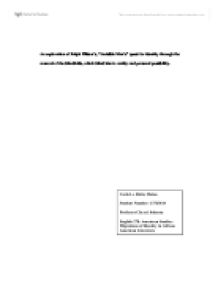 An exploration of Ralph Ellison's, &quot;InvisibleMan's&quot; quest for identity through the removal of the blindfolds, which blind him to reality and personalpossibility.

An exploration of Ralph Ellison's, "Invisible Man's" quest for identity through the removal of the blindfolds, which blind him to reality and personal possibility. Conflicting physical, social and psychological journeys forms the theme of migrations in Ralph Ellison's, "Invisible Man". The nameless narrator, "invisible man", migrates toward an understanding of what it means to "be invisible", in terms of how people view us or choose not to see us at all. Ellison's, "invisible man" is continually being reborn and altered by experiences, which further develops the theme of both physical and psychological migrations. However, migration in the sense of a desired escape from segregation, a better life, or the ultimate quest for identity, involves sacrifice as well as psychological impact due to uprooting oneself, as explored throughout the novel. Ellison portrays and explores this theme through the invisible man's feelings, emotions and personal "development". How do we move from one kind of consciousness to another? The invisible man initially experiences his "invisibility" as both alarming and degrading; however, through experience, he soon learns to value this sense of invisibility as being liberating. "I was and yet I was invisible, that was the fundamental contradiction. I was and yet I was unseen. ...read more.

He doesn't even see me...", but more importantly, the narrator's own experiences of blindness, or lack of vision, such as in chapter sixteen when he addresses the black community under enormous, blinding lights, each case corresponding the failure of sight to a lack of insight. The Battle Royal represents the white men of the society keeping the black men oppressed in a state of darkness, confusion and fear. The white men vicariously live out their desire to be less civilized by constructing the event and by blindfolding their black "victims". White blindfolds thus blindfold the boys literally and figuratively. Before the narrator moves his blindfold, he realises that he had never truly experienced darkness before and it scares him. His invisibility is again foreshadowed, as the reader knows that he will fade as a character into more darkness as the novel progresses. In chapter five, the narrator witnesses a speech by Reverend Homer Barbee at the college chapel. Here the reader is confronted with yet another example of storytelling within storytelling. Barbee's story is one which has been told many times before and it seems to echo how the narrator's life will proceed, touching on points such as an under riding conspiracy, a funeral procession, and the journey underground. ...read more.

Trueblood's very name is suggestive, as he is true to his blood, nature. In contrast, the narrator looks away in shame at Trueblood's audacity during the storytelling. However unfair or prejudiced the view of a false reality evidently is, it is indeed reality that the nature of existence is shaped by such stereotypes and manifestations of those in power to aid their own means; in this case, the white community. Trueblood's storytelling within the narrator's storytelling is symbolic. Upon closer examination of the dream which Trueblood talks about, one notices that it is strangely symbolic of the entirety of the narrator's story, picking up on the themes of a race without a finish line and an awakening out of the tunnel of darkness. Symbolically too, when he wakes up, reality is worse than his illusion had been. Faced with this kind of reality, it is no wonder Mr Norton, a trustee of "the illusion", feels faint and desires whisky. The narrator is caught up in a race against himself, as his grandfather writes in his dream in chapter one: "Keep This Nigger-Boy Running". "It was a dream I was to remember and dream again for many years after. But at that time I had no insight into its meaning." (Ellison: 32). Related to the incident of Mr Norton visiting Trueblood, we are introduced to one of the many appearances of contradiction and paradox. ...read more.