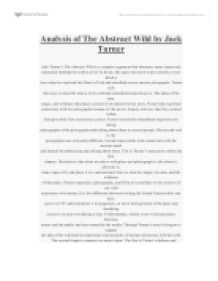 Analysis of The Abstract Wild by Jack Turner

Analysis of The Abstract Wild by Jack Turner Jack Turner's The Abstract Wild is a complex argument that discusses many issues and ultimately defends the wild in all of its forms. He opens the novel with a narrative story about a time when he explored the Maze in Utah and stumbled across ancient pictographs. Turner tells this story to describe what a truly wild and unmediated experience is. The ideas of the aura, magic, and wildness that places contain is introduced in this story. Turner had a spiritual connection with the pictographs because of the power, beauty, and awe that they created within him upon their first mysterious contact. Turner ruined this unmediated experience by taking photographs of the pictographs and talking about them to several people. His second visit to the pictographs was extremely different- he had removed the wild connection with the ancient mural and himself by publicizing and talking about them. This is Turner's main point within the first chapter. He believes that when we take a wild place and photograph it, talk about it, advertise it, make maps of it, and place it in a national park that we ruin the magic, the aura, and the wildness of that place. Nature magazines, photographs, and films all contribute to the removal of our wild experience with nature. It is the difference between visiting the Grand Canyon after you have seen it on TV and read about it in magazines, or never having heard of the place and stumbling across it on your own during a hike. Unfortunately, almost every wild experience between nature and the public has been ruined by the media. Through Turner's story he begins to explain the idea of the wild and its importance and necessity of human interaction with the wild. The second chapter contains two major ideas. The first is Turner's defense and explanation of the appropriateness of anger. ...read more.

Turner's third reason is that the government has tamed the wild for recreational purposes. This is done by placing signs, building trails, and making maps. All of these create a mediated experience for the adventurer and steals the wildness from there experience with nature. Returning to Turner's experience with the pictographs in chapter one, all of these signs and maps combine to remove the factor of surprise from a wilderness area. An adventurer will never experience the wild of discovering a waterfall or any surprise that nature has to offer because signs and maps ruin the experience. His fourth reason that our wilderness is not wild is that we made laws that allow our wilderness to be artificially controlled and managed. This is very unfortunate. Ecosystems are constantly being altered, predators moved, and wildfires suppressed. Wild nature is autonomous and fixes its own problems. Man's interference is slowly making wilderness dependent of artificial influence. Turner argues that tourism is destructive. Society wrongly views wilderness as a fun place for human recreation. We have become wilderness fun hogs. Humans take an anthropocentric view toward wilderness and only see it in terms of how much fun can I get out of this park; all the while, completely ignoring the human need for wild experience and intimate connection with nature. The result of our present perception is our emotional loss with wild nature. We have lost the understanding of how to connect with the wild within wilderness. Turner claims that most ecologists and conservationists turn to technology to help preserve the wilderness. Realistically, the solution lies in our past, our roots, not in the future of technology. The solution lies within the knowledge of wild people, such as the native Americans whose cultures have been wiped out by American imperialism and western expansion. Turner does not find hope in the solutions that deep ecologists have to offer either. ...read more.

Starting from where their predecessors ended, this new counter-culture would adopt a geocentric view and become the future of the environmental movement. Another major issue that Turner discusses is the effectiveness of different methods of solving ecological problems. I agree with Turner that conservation biology, biodiversity, and preservation seem like short term answers to long term problems. These are science's quick remedies. At the root of this issue is the philosophical idea that if human technology and control is ruining the environment then more human technology and control will not fix it. Trying to solve ecological problems by artificial means will only add to the problem. No matter how you justify it or disguise it, human technology and control of ecosystems disrupts the natural order in which the system operates. The environment was fine before we altered it with our pollutants and behavior, so it will only begin to repair itself in the absence of human influence. This is a logical idea that MIT scientists can't seem to comprehend because they would rather indulge in their "playing God'; with nature. Turner believes that we should let nature sort it out. If we just stop conservation biology and the experiments in wilderness labs maybe nature can find its own natural way of returning to homeostasis. Whether or not I accept either solution boils down to the idea of the wild. The "let nature sort it out'; solution is decaying fast. Philosopher and deep ecologist George Sessions, gave the environment twenty years before its collapse. The "let nature sort it out'; solution is running out of time. At the same time, Turner can't predict the future of science and ecological research through the writings of Thoreau and Muir. There is always the undeniable, and yet, unpredictable possibility that science might produce an ecological cure based on chemical compounds. However, implementing chemical compounds into ecosystems and organisms won't preserve the wildness of an ecosystem. The possibility of a viable techno-wilderness is imaginable, but the wildness of the land, the flora, and the fauna will be lost forever and, I don't think science can cure that. ...read more.