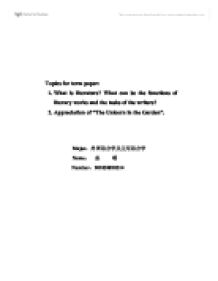 Appreciation of The Unicorn in the Gardenand What is literature?

Topics for term paper: 1. What is literature? What can be the functions of literary works and the tasks of the writers? 2. Appreciation of "The Unicorn in the Garden". Major:??????????? Name: ? ? Number:201030810314 1. What is literature? The quest to give a definition to "literature" is a road that is much travelled, though the point of arrival, if ever reached, is seldom satisfactory. For centuries, writers, literary historians, and others have debated bout but failed to agree on a definition for this term. In fact, the only thing that is certain about defining literature is that the definition will change. Concepts of what is literature change over time as well. What may be considered ordinary and not worthy of comment in one time period may be considered literary genius in another. Initial reviews of Emily Bronte's Wuthering Heights in 1847 were less than spectacular; however, Wuthering Heights is now considered one of the greatest literary achievements of all time. Literature is a creation. The authors tend to create their works based on the real world combining with their expansive imagination. And in some degree, these creations have surpassed the real. Literature is the creation whose aim is to present and reflect author's feeling and emotions or express their view on something. Even how great these creations are, they are created by the authors, so what they've written are to serve the aim which is to present their feeling and emotion or reflect their view on something. They would use letters to express what they thought and felt and to give their hope. In "Sons and Lovers", Laurence told out his hate to his mother who gave him not only her hope and passion but also her all-possessive affection which becomes a hindrance to his independent development as a man, pouring out his psychological torture in the bottom of his heart. And the main character Paul (symbolized himself) ...read more.

Women, Thurber seems to say, must be dealt with firmly and decisively, or they will ruin your life. His works are, with serious and rich social significance, combined his humor with the profound cultural intension and philosophy of life to disclose the folly of the ordinary people and ridiculous happenings in the daily life so as to inspire people to see things in their true color and to have a clear idea of the reality, letting people reflect and giving them inspiration. 2. The Brief Analysis of the Story The short story The Unicorn in the Garden written in 1939 by James Thurber is about a woman who thinks her husband is crazy, but later on she is the one who is thought to be mad. This story is well developed and has an appropriate structure. The plot of Thurber's fable The Unicorn in the Garden can be summarized in only a few paragraphs. A man wakes his wife to tell her there is a unicorn in the garden, eating the flowers. Without getting up to look out the window, she tells him there can't be: "A unicorn is a mythical beast." He goes back into the garden, returns again to the bedroom, and repeats his assertion. His wife, still not getting up to look out the window, warns him that "You're a booby...and I'm going to have to put you in the booby hatch." After the man returns to the garden, the wife -- with "a gloat in her eye" -- calls the police and a psychiatrist. When they arrive, she tells them what her husband said to her, assuming that they will lock him up (which is clearly what she wants). The police and the psychiatrist ask her husband whether there is, in fact, a unicorn in the garden, and he says "Of course not. The unicorn is a mythical beast." Consequently, they lock up the wife -- which is clearly what the husband wants. ...read more.

4. The Symbolic Meanings of the Flowers Beside the two persons, symbolic meanings of flowers are very important in this fable. The language of flowers, was a Victorian-era means of communication in which various flowers and floral arrangements were used to send coded messages, allowing individuals to express feelings which otherwise could not be spoken. So the author selects three kinds of flowers to express his intended meanings. The first flower the unicorn eats is roses. They are a symbol of love and affection. The unicorn eat the roses firstly, maybe it indicate that their marriage will break up in the end. And we can predict the ending from another meanings of flower-tulips. They are a declaration of true love. And when the husband told his wife about the unicorn, his wife responded coldly, the man came back to the garden; the unicorn was browsing the tulips. This again forebodes the ending. The lily with which the man fed the unicorn is a symbol for faith, purity and innocence. The white unicorn eats the white lily out of the man's hand. Maybe he husband himself believes himself was an innocent person and he fed the unicorn the lily rather any flowers. It was out of conscious. In fact, we can see that the man was having his scrambled eggs which had the white color of albumen and the yellow color of yolk which coincide with the colors of the unicorn-- a white unicorn with a gold horn. So the author selects these symbols elaborately, not optionally. 5. Conclusion Just as we learn the lesson in this story: we've got to watch you don't fall into your own trap. James Thurber combined his humor with the philosophy of life to disclose the folly of the ordinary people and ridiculous happenings in the daily life so as to inspire people reflect and giving them inspiration. Reference: 1.???,James Thurber and His Humor,???????(?????),2000?4? 2.???,???????????�???????�?????, ???????,2010?31? 3.???????,?�???????�?????,??????????,2007?2????,??45? 4.???,?�???????�?�?????�???????????????????, 2008.04(???) 5. http://www.storybites.com/thurber2.htm 6. http://en.wikipedia.org/wiki/Short_story ?? ?? ?? ?? 10 ...read more.