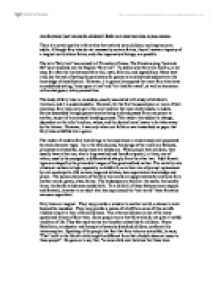 Are fairytales 'just' stories for children? Refer to at least two tales in your answer.

Are fairytales 'just' stories for children? Refer to at least two tales in your answer. There is a certain quality in fairy tales that enthrals us as children, and inspires us as adults. Although fairy tales do not necessarily contain fairies, they all weave a tapestry of a magical world where fairies, and other supernatural beings, are possible. The term "fairy tale" was coined in 17th century France. The French saying, "conte de f�e" was translated into the English "fairy tale". To define what fairy tale itself is, is not easy, for often the line between fairy tale, myth, folk tale, and legend blurs. Many have tried, but the task of setting the parameters for genres is as untidy and subjective as the knowledge of classification. However, it is generally accepted that most fairy tales have an undefined setting, "once upon a time" and "in a land far away", as well as characters with archetypical, static personalities. The study of fairy tales is, nowadays, usually associated with study of children's literature, and it is understandable. However, for the first thousand years or more of their existence, fairy tales were part of an oral tradition that was told by adults, to adults. Stories descended through generations by being told and passed from one person to another, as part of a communal bonding process. ...read more.

And today, because of the dominance of the culture industry, the Disney version, based on Perrault, has in turn become the standard story. "Aschenputtel" is another version of "Cinderella", which has clear Grimm elements to it. This version of the tale is more likely to appeal to an adult audience because of the retribution visited upon the stepsisters at the end and the cruelty she experiences is identified more specifically. Unlike Perrault's version, Cinderella is punished at the end. "Little Red Riding Hood" is another one of the world's most famous fairytales. Perrault was the first to write down "Little Red Riding Hood," but the tragic ending of this version has caused some to question whether it has a genuine folk origin. Shavit argues that it is a satire about "the city gentleman who does not hesitate to take advantage of the poor village girl" and she notes an eroticism in the description of the little girl as "a specific element encouraging the satiric reading", and the moral at the end tends to reinforce it. Shavit's criticism on "Little Red Riding Hood" is leaning towards the support of an adult audience. The Grimms' version, "Little Red Cap", is less satiric, more naive, and directed to the child alone, for educational purposes. ...read more.

In these tales as in the originals, the great revelations, for good or ill, most often take place in the house, within the family - the only setting considered worthy of tragedy by the ancient Greek dramatists. Like their great predecessors, these modern fairy tales dramatize the darker side of childhood, the end of innocence. Yet some questions must be asked. Fairy tales have been an important part of cultures all over the world. They have been passed down through generations and read and reread to countless children. But do they really have any place as children's stories? This is one of the questions that has recently been pressed against them and one which is well worth asking. If children are to be presented with fairy tales, it is quite reasonable to question the effect of these stories on them. This is reasonable to ask, but the answer may not come as naturally. Children are people too. They and their reactions can be just as varied as their grown-up counterparts. Through these shades of doubt, a general statement can be made. Fairy tales can make good children stories. Whether or not adults read them, they should read and learn to understand fairy tales so that they can better comprehend the structures of literature as well as for the sake of the wonder, pleasure, and human understanding these stories can provide in their own right. 2148 words. ...read more.