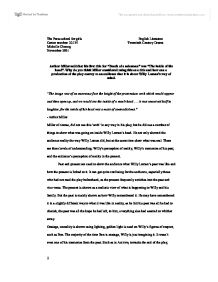 Arthur Miller said that his first title for &amp;#147;Death of a salesman&amp;#148; was &amp;#147;The inside of his head&amp;#148;. Why do you think Miller considered using this as a title and how can a production of the play convey to an audience that it is about Willy

The Perse school for girls English Literature Centre number: 22135 Twentieth Century Drama Michelle Cheung November 2001 Arthur Miller said that his first title for "Death of a salesman" was "The inside of his head". Why do you think Miller considered using this as a title and how can a production of the play convey to an audience that it is about Willy Loman's way of mind. "The image was of an enormous face the height of the proscenium arch which would appear and then open up, and we would see the inside of a man's head . . . it was conceived half in laughter, for the inside of his head was a mass of contradictions." - Arthur Miller Miller of course, did not use this 'arch' in any way in his play, but he did use a number of things to show what was going on inside Willy Loman's head. He not only showed the audience reality the way Willy Loman did, but at the same time show what was real. There are three levels of understanding: Willy's perception of reality, Willy's memories of his past, and the audience's perception of reality in the present. Past and present are used to show the audience what Willy Loman's past was like and how the present is linked to it. It can get quite confusing for the audience, especially those who had not read the play beforehand, as the present frequently switches into the past and vice versa. ...read more.

In Act one, the first time present switches into the past, these stage instructions are given: The apartment houses are fading out, and the entire house and surroundings become covered with leaves. Music insinuates itself as the leaves appear. I thought the production's alterations were significant, as the brighter past is relevant in terms of what was happening inside Willy's head. It suggests he sees the past as brighter, and more joyful. Something that reality is not. In the present, there should be an imaginary kitchen wall onstage that the actors could not walk through. In the stage directions, Miller states: Whenever the action is in the present the actors observe the imaginary wall-lines, entering the house only through its door at the left. But in the scenes of the past these boundaries are broken, and characters enter or leave a room by stepping 'through' a wall on to the forestage. This shows Willy's mind is not in the kitchen or even his house anymore and has drifted into a world of its own. For example, in scenes with Biff and Happy in the past. The actors freely walked through the imaginary wall-lines. Scenes with The Woman would always be in the past as she was only a memory of Willy's. In the film, she was bought on in Act one after Willy looked through a mirror, this was again, not something Miller had suggested but it worked well, as it showed he was imagining all of it and it wasn't happening in reality at all but in his mind. ...read more.

Willy: But it just broke again! Linda: Well, it's old, dear. Willy: I told you we should've bought a well advertised machine. Charley bought a General Electric and it's twenty years old and it's still good, that son-of-a-bitch. The scenery in the production that I went to see with my school was very symbolic of what Willy's mind was like. It seemed closed in, small and Willy appeared to be trapped in it wherever he went. The house was in the background of all the scenes, this seemed to show that no matter where Willy was, he couldn't free himself from the pain and misery in his life. The backdrop was of the apartment houses around the Loman house. They towered over the house and invaded the privacy. I think Arthur Miller made the right choice with using 'Death of a Salesman' as the title for the play instead of 'The inside of his head'. Though the original name was suitable, I feel it gives away too much of what the play is about. 'Death of a Salesman' however is a little more discreet and subtle and gives away only the fact that there is a death at some point of the play. It doesn't give any clue as to what the structure of the play is. Miller is very careful with his words in this title. He uses 'A salesman' as opposed to 'The salesman', this gives us the sense that the salesman who died was not important. I think the title as it is now adds a bit more excitement, suspense and drama into the play for the audience. Michelle Cheung 1 ...read more.