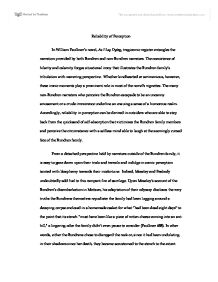 In William Faulkner’s novel, As I Lay Dying, tragicomic register entangles the narration provided by both Bundren and non-Bundren narrators. The coexistence of hilarity and calamity forges situational irony that illustrates the Bundren family’s tribulation with wavering perspective.  Whether kindhearted or acrimonious, however, these ironic moments play a prominent role in most of the novel's vignettes. The many non-Bundren narrators who perceive the Bundren escapade to be an uncanny amusement or a crude irreverence underline an ensuing a sense of a humorous realm. Accordingly, reliability in perception can be derived in outsiders who are able to step back from the quicksand of self-absorption that victimizes the Bundren family members and perceive the circumstance with a selfless mind able to laugh at the seemingly cursed fate of the Bundren family.

From a detached perspective held by narrators outside of the Bundren family, it is easy to gaze down upon their trials and travails and indulge in comic perception tainted with blasphemy towards their misfortune.  Indeed, Moseley and Peabody undoubtedly add fuel to this rampant fire of sacrilege. Upon Moseley’s account of the Bundren’s disembarkation in Mottson, his adaptation of their odyssey discloses the very truths the Bundrens themselves repudiate: the family had been lugging around a decaying corpse enclosed in a homemade casket for what “had been dead eight days" to the point that its stench “must have been like a piece of rotten cheese coming into an ant-hill," a lingering odor the family didn’t even pause to consider (Faulkner 488). In other words, either the Bundrens chose to disregard the reek or, since it had been undulating in their shadows since her death, they became accustomed to the stench to the extent that it was no longer recognizable. At this time, Moseley’s perspective as a bystander enables us to stop and smell the roses in order to appreciate or weigh out their value. However, in this case, the roses are metonymically substituted by the putrefying carcass of an elderly woman which we must measure the significance of to the family.  His ability to derive situational irony in the Bundrens’ misfortune allows us to step back from the panicked convolution of the family’s own narrations and examine their hardship with a clear mind.

By employing implicit absurdity perceived by the onlooker in instances of innocent tragedy of the victim, Faulkner situates the reader outside the family in order to provide them with a clear angle. Even without the direction of a bystander, we perceive situational irony in circumstances that are grave and solemn to the Bundrens, as they are unable to feel otherwise. Addie’s death is sobering. It is understandable. However, Faulkner strategically paints the canvas for us before we can even start to imagine independently. Indeed, the family’s thoughtfulness to tend to Addie by “[propping] her on her pillow” to “raise her head so that she can see the coffin Cash is making just outside her window” provokes an emotional appeal (342). Still, we have no emotional attachment to her. She is a corpse to us. We know she is predestined to expire. And soon. Thus, we find it ironic that the family is going out of its way to accommodate her lifeless body to foresee her fate in the ground, inhumanely taunting her with mortality. Further acts of empathy towards Addie are exhibited by the holes Vardaman drills in Addie's coffin “so that his mother can breathe,” a perceptibly compassionate gesture illustrative of a son caring for his ailed mother (376). For Vardaman, the epitome of naivety in the early stages of the novel, these holes are vital to her comfort. Vardaman acts out of pure somberness. Conversely, we know his efforts are futile. A corpse does not breathe, nor does it know the difference between being contented or distressed.  Therefore, we discredit Vardaman’s sincerity because we know it serves no purpose aside from appeasing his downtrodden spirit.

Faulkner utilizes Darl as an insider from the outside, undercover in a sense, as he is a member of the family though his ability to hysterically laugh at his family’s misfortune as he loses grip of sanity dictates his stance as comprehensive outsider. Subsequent to Addie’s burial, Jewel and Dewey Dell ensnare Darl and turn him in to two officers instructed to contain him and transport him to an asylum in Jackson. At the outset, shock and distress overcome Darl in consequence to Cash’s lack of admonition, and we witness Darl’s first true expression of sentiment. Usually Darl’s articulates his narrations with a verbose though detached register. In this instance however, Darl expresses his feelings in an effusive manner by laughing frenziedly. This behavior is not well received by Darl’s family members. From Cash’s perspective, the event provides no form of humor: "I be durn if I could see anything to laugh at" (514). Darl, alternatively, derives plentiful humor in the occurrence. Among the siblings of the Bundren family, Darl is the only member to perceive the absolute preposterousness of their odyssey; Darl is the only member of the family that makes an effort to liberate his mother from the contemptible and insolent dealings along the journey. Consequently, his family deems him insane. Nevertheless, his perception is perhaps the most credible for this very reason as he experiences all of the family’s trials first-hand though he is able to step back, and perceive them as would an outsider.

Upon the conclusion of the novel, nonetheless, laughter appears to be the only retort to all preceding misfortunes. After the passing of nine days in which the family flouted multiple perilous obstacles in order to transport Addie's dead body to its ultimate resting place, the memorial service culminates in a spectacle that Faulkner abridges into two lines. The only mention of the burial itself announces the family "got it filled and covered"(513). The alleged climax of the trek lacks expected description due to the focus away from the family's bereavement and misery in laying the familial matriarch to rest, and instead, on the independent personal drive that truly promoted the continuation of the odyssey. Thus, outsiders and Darl alike possess the most reliable perceptions due to their ability to target the focus of the family in terms of morality and sensibility and steering clear of personal detours spoiled by ulterior motives. The final segment specifically- Anse’s introduction of the “new” Mrs. Bundren to his children- exploits humor to accentuate the disgracefulness of the circumstances. Beneath this layer of superficial irony lies a core of aching and disconcerting awareness of what transpired in the monologues amassing to this incongruous finale. Anse’s timely indulgence in another woman tops off the situational irony of the novel, hitherto one way or another such a finish is far from a commemoration of life's conquest over death. Instead, the irony produces a laughter shaded with grief and repentance.