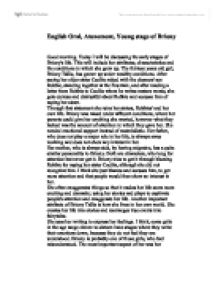 Good morning. Today I will be discussing the early stages of Briony's life. This will include her attributes, characteristics and the conditions in which she grew up. The thirteen years old girl, Briony Tallis, has grown up under wealthy conditions. After seeing her older sister Cecilia naked with the cleaners' son Robbie, standing together at the Fountain, and after reading a letter from Robbie to Cecilia where he writes mature words, she gets curious and distrustful about Robbie and accuses him of raping her sister.

Through that statement she ruins her sisters, Robbies' and her own life. Briony was raised under affluent conditions, where her parents could give her anything she wanted, however what they lacked was the amount of attention in which they gave her. She needed emotional support instead of materialistic. Her father, who does not play a major role in her life, is always away working and does not show any interest in her.

Her mother, who is always sick, by having migraine, has a quite similar personality to Briony. Both are characters, who long for attention but never get it. Briony tries to get it through blaming Robbie for raping her sister Cecilia, although she did not recognize him. I think she just blames and accuses him, to get more attention and that people would then show an interest in her.

She often exaggerates things so that it makes her life seem more exciting and dramatic; using her stories and plays to captivate people's attention and exaggerate her life. Another important attribute of Briony Tallis is how she lives in her own world. She creates her life into stories and rearranges true events into fairytales.

She uses her writing to express her feelings. I think, some girls in the age range eleven to sixteen have stages where they write their emotions down, because they do not feel they are understood. Briony is probably one of those girls, who feel misunderstood. The most important aspect of her was her writing, in which she expressed everything she felt and wanted. Briony once says "the author is god". This may means that the author is the one who chooses what happens and she can decide how the story is structured.

In my opinion that is a very important matter for Briony, because nobody ever listens to her and so she decide what happens in her own story. Her main story was the play called "The Trials of Arabella", which she wrote for her older and idolised brother Leon. Arabella was a character, whom she thought was based on her. She saw the Trials of Arabella in her own life, creating the people who she knew in real life into ones in her story. That seems to be the only way she can associate people that live, by making them into characters she can understand them.

Brionys sister Cecilia Tallis played another important role in her life, especially in her younger days. As she grew slightly older

Cecilia distanced herself from Briony and the whole Tallis family. She seemed almost ashamed of her family at some of the earlier parts of the story as well as later on. Unlike Cecilia, at the start of the novel, it seems that Briony is oblivious to the fact that the real life was not as good as she made it out to be. I believe that although Briony was quite young, she was still a little strange. She could not handle reality, so she created it into a fictional story. She longed to make her life more complicated, what she did not realise at first was that her life was already complicated, but because she was living in her own world she could not see or accept this.

This student written piece of work is one of many that can be found in our University Degree E.B. White section.