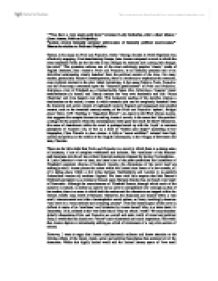 ' "You have a very small park here," returned Lady Catherine, after a short silence.' (Jane Austen, Pride and Prejudice). "Austen creates intensely personal microcosms of intensely political macrocosms." Discuss in relation to Pride and Prejudice. Tanner, in his essay on Pride and Prejudice, wrote: "during a decade in which Napoleon was effectively engaging, if not transforming Europe, Jane Austen composed a novel in which the most important events are the fact that a man changes his manners and a young lady changes her mind." This quotation reduces one of the most enduringly popular 'classic' works of English literature, Jane Austen's Pride and Prejudice, to an intensely personal tale of an individual relationship, utterly detached from the political context of the time. For many readers, particularly Austen's contemporaries, there is a tendency to emphasise this romantic, even mythical element to the plot. Isobel Armstrong, in her essay Politics, Pride, Prejudice and the Picturesque comments upon the "fairy-tale gratifications" of Pride and Prejudice, implying a view of Elizabeth as a Cinderella-like figure who, following a 'magical' moral transformation (in herself and Darcy) marries her very own handsome and rich 'Prince Charming' and lives happily ever after. This fantastical reading of the storyline implies a timelessness to the action, a sense in which romantic plot can be completely detached from the historical and social context of eighteenth century England and transposed onto another context, such as the twentieth century setting of the Pride and Prejudice 'update', Bridget Jones' Diary. D.W. Harding, in "Regulated Hatred": An Aspect in the Work of Jane Austen, also suggests this escapist element to reading Austen's novels, in the sense that "she provided a refuge for the sensitive when the contemporary world grew too much for them". Moreover, this sense of detachment within the novel is perhaps bound up with the 'myth' or common perception of Austen's life, of her as a kind of "darkly seen shape" (according to her biographer, Clare Tomalin in Jane Austen: A Life) ...read more.

However, it seems that any reference to the background of political turmoil in France upon which Austen was writing is another level that remains very much 'unspoken' or implicit in the text. Austen herself complained, in a letter to her sister Cassandra, that Pride and Prejudice was "rather too light and bright and sparkling" and could be much improved by the inclusion of "history of Buonapart�". For Butler, this quotation serves more as a symbol of Austen's playful relation to, rather than a genuine denial of, any specific contemporary political comment. Yet, even those allusions to the Napoleonic wars that are present, seem very much related to the peripheries of the text. The soldiers stationed at Meryton are portrayed as far more important for the pleasant social and romantic opportunities that they provide, rather than as a frightening symbol of a threat of French invasion. Moreover, the single explicit reference to the war-time context - in the final, summarising comment that in spite of "the restoration peace" Wickham and Lydia continue to flit about the country - serves only to highlight how the characters within the novel are governed by a time frame that is utterly detached from contemporary politics. It is perhaps not surprising that a clear response to the Napoleonic background cannot be read into the text, given the fact that Austen wrote and revised Pride and Prejudice over the course of a seventeen year period. In fact, the ambiguous nature of contemporary political references in Pride and Prejudice may, in themselves, be seen as a reflection of the contemporary social climate when the book was written. Armstrong summarises this anxiety: "the novel was written in a period when government repression was fierce, and the definition of sedition extraordinarily narrow." It seems therefore more appropriate to consider the turmoil as providing a background or subtext for the social and political anxieties about change, which perhaps provoked a desire to adhere even more closely to the safe boundaries of tradition and the ideals of the past. ...read more.

or more 'natural' individuality. (Armstrong points to a possible link between femininity and the picturesque in the novel: "the feminine is a profoundly disruptive category in this novel, as it is for [Uvedale] Price's picturesque"). Significantly, Pemberley therefore provides the setting for one of the most highly symbolic acts of the book - Elizabeth's crossing of the bridge to meet Darcy at the other side. This provides a fitting metaphor for Austen's politics in the entire novel; she points to the possibility for a lucky and deserving individual (the bridge is only wide enough for one to cross) to cross the literal and metaphorical boundary and 'bridge' the gap of seemingly "impassable gulf" into a higher social class and a different social, economic and political landscape. Yet even in creating this individualised and symbolic fairy tale ending, Austen reminds us of the chasms that exist between the different social groups in society as a whole; both Elizabeth and the reader remain highly conscious of the divisive nature of the boundaries that are built into the social structure in which the heroine must live. The union of Elizabeth and Darcy in the idealised landscape of Pemberley therefore allows Austen to bring the action to a highly "aesthetic solution" or conclusion as well as achieving a kind of narrative resolution (C. Johnson, Pride and Prejudice and the Pursuit of Happiness). At first glance, Pride and Prejudice may have a satisfying "fairy tale quality" but below this "light and bright and sparkling" surface, fundamental and complex political questions concerning marriage, gender and social mobility are raised. As Armstrong writes: "the text asks demanding and radical questions - perhaps the more radical because they are indirect". Yet at the same time, there is also a striking resonance in Tanner's view that "eighteenth century thought was fundamentally loyal to the respect for limits, definition and clear ideas", which is also encapsulated within Pride and Prejudice. It seems to me that, contrary to Butler's reading of Pride and Prejudice as a pointed commentary on the contemporary political situation, Austen's stance is more one of general optimistic conservatism. ...read more.