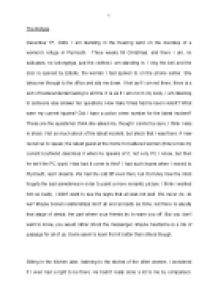 Autobiographical piece and reflective commentary. December 5th, 2009. I am standing in the freezing wind on the doorstep of a womens refuge in Plymouth.

﻿The Refuge December 5th, 2009. I am standing in the freezing wind on the doorstep of a women?s refuge in Plymouth. Three weeks till Christmas, and there I am, no suitcases, no belongings, just the clothes I am standing in. I ring the bell and the door is opened by Estelle, the woman I had spoken to on the phone earlier. She takes me through to the office and sits me down. I feel as if I am not there, there is a sort of transcendental feeling to all this. It is as if I am not in my body, I am listening to someone else answer her questions. How many times had he been violent? What were my current injuries? Did I have a police crime number for the latest incident? These are the questions I think she asked me, though I cannot be sure; I think I was in shock. Not so much shock of the latest incident, but shock that I was there. A new recruit so to speak; the latest guest at the home for battered women (this is how my current boyfriend describes it when he speaks of it; not very PC I know, but then he isn?t the PC type). How had it come to this? I had such hopes when I moved to Plymouth, such dreams. We had the odd tiff even then, but it?s funny how the mind forgets the bad sometimes in order to paint a more romantic picture. I think I wanted him so badly, I didn?t want to see the signs that all was not well. We never do, do we? Maybe broken relationships don?t all end as badly as mine, but there is usually that stage of denial, the part where your friends try to warn you off. But you don?t want to know, you would rather shoot the messenger. Maybe heartache is a rite of passage for all of us. Some seem to learn from it better than others though. ...read more.

I was at the refuge for six months, then I managed to get my own flat. It?s not much, a little one bed place near to uni, so it?s nice and handy for me. The best thing is its all mine. I don?t have to worry about someone coming home after work and kicking off about the state of the place, there is no fear of someone running a white glove over the dado rail to show where I have missed the dust. I learnt a lot from my time in the refuge. Whilst I was there, we had workshops on recognising abusive behaviour. Many people mind think it would be easy to spot, but it?s often the things that you probably find quite sweet at first that might alert you. You might think his wish to be with you all the time a sign of how much he loves you, rather than a way to isolate you from your friends. His constant texts are a measure of affection, not a way of checking on your whereabouts. It?s those little things that escalate, till one day, you realise how wrong it all is. That day is usually too late. At least I know now what to look out for. And here I am, two years down the line, standing on that same refuge doorstep. I am about to be interviewed for a voluntary post as a residents mentor. The requisite year since having moved out is long over (time for personal growth and to show we have not fallen back into the same patterns of abusive relationships) and I am now deemed fit to offer my services to women who are in the position I used to be. I can be a shining role model of what you can achieve if you learn from the past. Look, here she is; the girl who used to be a victim of domestic violence. ...read more.

This is why I included a segment about my childhood and adolescence. I think the comments that I remembered from my childhood had a bearing on my behaviour as a teenager, and indeed, had a bearing on my relationship formations in my later years. This segment was used not only to bring some understanding to the reader of my later actions, but also it was used as a justification of those actions. Lejeune distinguishes between the utterance (the raw material) and the enunciation (the order of telling) showing you can move beyond linear chronology to develop a theme and pattern. I have used this in my work to develop the theme of need. I jump from the period I was in an abusive relationship back to my teenage years when I allude to the fact I had a series of short sexual relationships. These two episodes link the theme of the need for male attention. The jump from my time at the refuge to living on my own shows the self-development I have undergone and the change from dependence to independence. I learnt a lot from the life writing module, and found the exercise of writing about my past was in many ways cathartic. Rather than making me dwell on the past, it made me reflect more on the present and the future. Hunt (2000) tells us that ?In the process of struggling to find a voice for the story of my past I discovered that I had learned a few things about the person I was in the present, and these insights helped me to understand myself better? BIBLIOGRAPHY Angelou, M. I Know Why The Caged Bird Sings (2001), London, Virago. Hunt, C. Therapeutic Dimensions Of Autobiography (2000) London, Kingsley Publishers Limited. Lejeune, P. L?Autobiographie en France, 3rd Edition (2010) Paris, Armand Colin. Morrison, B. And When Did You Last See Your Father? (1998) London, Granta Publications. Swindells, J. The Uses Of Autobiography (1995) London , Taylor & Francis Limited. INTERNET RESOURCES http://www.womensaid.org.uk/domestic-violence-articles.asp?section=00010001002200360002&itemid=1269&itemTitle=British+Crime+Survey+underestimates+domestic+violence+statistics Viewed Online 22.1.2012. Baldwin, J. Stranger In The Village (1955) accessed at: https://pantherfile.uwm.edu/gjay/www/Whiteness/stranger.htm Viewed Online 22.1.2012. ...read more.