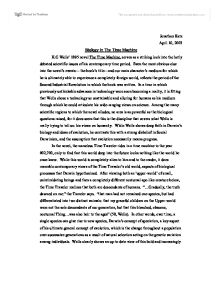 Biology in The Time Machine.

Jonathan Katz April 10, 2003 Biology in The Time Machine H.G Wells' 1895 novel The Time Machine, serves as a striking look into the hotly debated scientific issues of his contemporary time period. Even the most obvious clue into the novel's events- the book's title-and our main character's medium for which he is ultimately able to experience a completely foreign world, reflects the period of the Second Industrial Revolution in which the book was written. In a time in which previously unthinkable advances in technology were soon becoming a reality, it is fitting that Wells chose a technology so unattainable and alluring for humans as his medium through which he could articulate his wide-ranging views on science. Among the many scientific regions to which the novel alludes, no area is as powerful as the biological questions raised, for it does seem that this is the discipline that covers what Wells is really trying to tell us: his views on humanity. While Wells shows deep faith in Darwin's biology and ideas of evolution, he contrasts this with a strong disbelief in Social Darwinism, and the assumption that evolution necessarily means progress. ...read more.

Wells clearly shows an up-to-date view of this bold and increasingly accepted Darwinian hypothesis. At the same time though, Wells shows through these two different and unimpressive species, his contentions in another increasingly popular belief, the idea of social Darwinism. Conceived by British Philosopher Herbert Spencer, social Darwinism describes a scientific belief that emerged from evolution and natural selection in a way that Darwin never intended, trying to apply natural selection as a social process. According to this theory, the social environment closely resembled the competitive, natural environment, and those individuals who succeeded were biologically destined to do so and to continue to progress forward as a group. This idea was especially appealing to many Europeans and Americans because it catered to an ethnocentric belief in the inevitable caucasian dominance over other groups, such as Africans, whose countries had been under white imperialist rule. Wells makes it clear in The Time Machine that he does not subscribe to social Darwinism by the relationship he creates between the Elois and the Morlocks, which reverses over time. ...read more.

In fact, advancements in physics concepts directly related to the progression of biology and life. In the mid to late 19th century, the 2nd Law of Thermodynamics-the concept of entropy-began to be understood. Entropy is essentially the opposite of progress, saying that systems naturally tend towards disorder and chaos. While it is a physics term, Wells seems to support this concept in a biological context. Wells creates a world in which our Time Traveler is able to see the entropy of life. After beginning as a member of the Victorian elite in England, he then time travels to a significantly more primitive world with the "physical slightness of the [Eloi's] and their "lack of intelligence" (39, Wells) and the subterranean, nocturnal Morlocks. And finally, our Time Traveler jumps forward even further to see little more than monster crabs, riding even further, "watching with a strange fascination the sun grow larger and duller in the westward sky, and the life of the old earth ebb away" (104, Wells). Wells suggests that entropy, the gradual dissipation of energy within an increasingly chaotic system, is the fate of the universe. ...read more.

This student written piece of work is one of many that can be found in our University Degree H.G. Wells section.