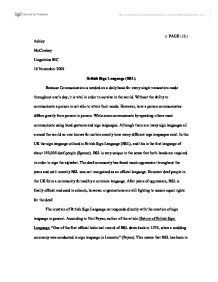 Ashley McCloskey Linguistics 80C 16 November 2009 British Sign Language (BSL) Because Communication is needed on a daily basis for every single transaction made throughout one's day, it is vital in order to survive in the world. Without the ability to communicate a person is not able to attain their needs. However, how a person communicates differs greatly from person to person. While some communicate by speaking others must communicate using hand gestures and sign languages. Although there are many sign languages all around the world no one knows for certain exactly how many different sign languages exist. In the UK the sign language utilized is British Sign Language (BSL), and this is the first language of about 150,000 deaf people (Spence). BSL is very unique in the sense that both hands are required in order to sign the alphabet. The deaf community has faced much oppression throughout the years and until recently BSL was not recognized as an official language. However deaf people in the UK form a community formed by a common language. After years of oppression, BSL is finally official and used in schools, however organizations are still fighting to secure equal rights for the deaf. The creation of British Sign Language corresponds directly with the creation of sign language in general. ...read more.

Smith explains that this means that they were unable to read simple things such as tabloids, newspapers or anything of that sort. Furthermore, many adult deaf people remember being angry because they were not able to understand what was going on around them or able to express themselves through sign language (Smith). Even in education sign language was forbidden until recently and they were not used in the teaching of deaf schools. Until recently many deaf children were not properly educated in sign language by either schools or their parents. In school the practice of sign language was discouraged and was not officially used in schools for deaf children. Furthermore as discussed in class lectures, children most easily learn language up until they reach the age of ten. This means that if deaf children do not start attending school to learn sign language until they are about 7 or later, they face a hard time learning this new language that should have been introduced to them at an earlier age. Even more Jim McCloskey states that only 10% of deaf children are born to deaf parents, which means that an astounding 90% of deaf children born are born unto hearing parents who probably do not know sign language. ...read more.

In the UK there are many events held every year that provide deaf people with an opportunity to meet. Furthermore there are many organizations for deaf people that provide information, advice, support, and help. Some of these organizations include British Deaf Association (BDA), Royal National Institute for Deaf People (RNID), and the Council for the Advancement of Communication with Deaf People (CACDP). In addition to having many organizations the deaf culture is one fill of Deaf art including poetry, stories, theatre, media, games, and even blogs. The deaf culture is much like any other culture in the world. They are united by a common language, BSL; therefore they form a society or community group bound together by common interests. There are many different sign languages used around the world. They have been created due to the necessity for the language, education, and communication of deaf people. BSL is merely an example of one of the many sign languages all around the world. Unfortunately, although BSL is recognized as an official language it does not enjoy the same benefits other languages have. Sign languages are very interesting for linguistics as they provide them with information as to how languages are created. If the mystery behind sign languages is solved then perhaps the mysteries behind spoken languages will too be deciphered in the near future. ...read more.