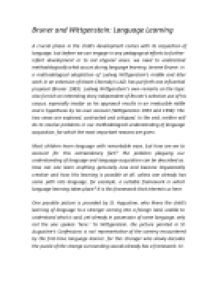 ﻿Bruner and Wittgenstein: Language Learning A crucial phase in the child's development comes with its acquisition of language, but before we can engage in any pedagogical efforts to further infant development or to aid atypical cases, we need to understand methodologically what occurs during language learning. Jerome Bruner, in a methodological adaptation of Ludwig Wittgenstein's middle and later work in an extension of Noam Chomsky's LAD, has put forth one influential proposal (Bruner 1983). Ludwig Wittgenstein's own remarks on the topic also furnish an interesting story independent of Bruner's selective use of his corpus, especially insofar as his approach results in an irreducible riddle and a hypothesis by his own account (Wittgenstein 1953 and 1958). The two views are explored, contrasted and critiqued. In the end, neither will do to resolve problems in our methodological understanding of language acquisition, for which the most important reasons are given. Most children learn language with remarkable ease, but how are we to account for this extraordinary fact? The problem plaguing our understanding of language and language acquisition can be described as. How can one learn anything genuinely new and become linguistically creative and how this learning is possible at all, unless one already has some path into language, for example, a suitable framework in which language learning takes place? It is this framework that interests us here. One possible picture is provided by St. Augustine, who likens the child's learning of language to a stranger coming into a foreign land, unable to understand what is said, yet already in possession of some language, only not the one spoken 'here.' To Wittgenstein, the picture painted in St. Augustine's Confessions is not representative of the scenery encountered by the first-time language learner, for this stranger who slowly decodes the puzzle of the strange surrounding sounds already has a framework. St. Augustine alters the character of the learner so that the issue of a suitable framework does not arise. ...read more.

This is possible only if the pupil responds to this further encouragement in a certain way and uses the rules he or she has been taught (Wittgenstein 1953, &#sect;29). In order to be able to say that a child has a command over language, it must know the meaning of the words ? it must be able to call things by their names without a trace of doubt. It is only then that one can say, to Wittgenstein, that there is an understanding of words, sentences, grammar, and so forth. To Bruner, it is perhaps the idea of our young as game players that is crucial to his book. In this sense, "play is the culture of childhood" (Bruner 1983, 121), although that children play games which are always like language-games remains part of the practice of game-playing, since qua protoconversation games always have a somewhat linguistic character. Bruner also draws an analogy of 'speech acts' between what he calls prelinguistic communicative acts and lexico-grammatical speech acts (Bruner 1983, 38), which fits into his broader life-like notion of language. In game-playing, stressful situations and the pressure of expectations are removed: the child can experiment without having to dread the consequences of its actions. Choices can be made which would not be acceptable under the functional pressure to achieve. Play serves "as a preparation for the technical-social life that constitutes human culture" (Bruner 1983, 45). It is within these games that more complex procedures are first tried and tested, and later become accepted practice. Wittgenstein's suggestions for the early stages of language learning leave behind an uncomfortable riddle that may have prompted Wittgenstein to put forth his description of the ostensive teaching of words in the first place. According to Bruner, Wittgenstein grapples with the question what features of a referent a label refers to, that is how words come to mean and refer (Bruner 1983, 81). ...read more.

But grammar only describes and in no way explains the use of signs. In the context of language learning, this just will not do and our picture of grammar must either be broken up and broadened, or Wittgenstein's remarks on language learning discarded. Bruner's position corresponds more closely to the discernible events in young children's lives, which leaves us with the uneasy conclusion that Wittgenstein perhaps failed to dismiss his riddle as just another philosophical question, that is, as mistaken. I do not wish to accept Bruner's side, because of its a priori assumptions, to which standard objections can be raised, some of which have been raised here. Most seriously, whilst Bruner has come up with a thesis for early language learning, he glosses over the consequences of having posited various innate characteristics. What is under critique in Bruner's Child's Talk is not that he has pointed out how one of Wittgenstein's hypothetical dilemmas is simply side-stepped, but that in turn he fails to shed the mantle of the philosopher-scientist. Even if he transports some of Wittgenstein's valuable insights into the character of language to child psychology, he does not go far enough. We are working with concepts here, just as the young child is working with concepts. We show each other instances of the language-game with the word "game" as we explore the idea of game-playing in children, until the coherence of our actions reaches the mirror of our audience. That mirror is not a tabula rasa which we fill, but one full of shared convention, expectations, and common history, as both Bruner and Wittgenstein point out. Yet if we strip all hypotheses in Bruner and Wittgenstein and all conventionalism, they still share a picture of children that may perhaps be contra-Augustinian, but that itself still is caught up in the same web. The scaffold which first delineates the space to be filled in language learning remains, along with our ability for learning. These certainly are philosophical concepts and not ones embedded in our practices of child rearing. ...read more.