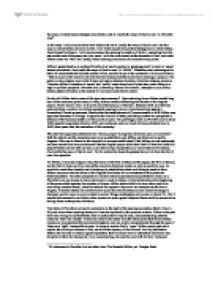 By means of what textual strategies does Milton seek to 'justify the ways of God to man' in Paradise Lost? In this essay I will set out to show how Milton sets out to 'justify the ways of God to men' and the ways in which Milton strives to do this. I will firstly explain the political background in which Milton found himself writing in. I will closely analyse the opening Invocation of Book I, explaining how this sets out the rest of the poem, and vice versa. I will also look closely at the character of God, and what Milton means by 'God' and 'justify, before offering a conclusion to summarise any points. Milton's great objective in writing Paradise Lost was to conduct a 'great argument' in order to 'assert eternal providence, /And justify the ways of God to men' (1. 24-26) 1. What the poet is claiming as his task is to demonstrate the ultimate justice of God, and thus to prove the existence of divine providence - that is, to prove the world is not ruled by blind chance, but that events have meaning or purpose. The poem is not a religious one in that it does not inspire religious devotion; it just has religious concerns. Therefore Milton's intention to 'assert' and 'justify' seem almost out of place here, more fitting in a legal or political pamphlet. ...read more.

The two sentences move from human to divine and achieve a literary effect similar to the shift from terrestrial to celestial realms encountered between the octaves and sestets of many sonneteers at the time, including Milton's own. We are introduced to one of the main themes in the poem on the opening line. 'Man' and the unity of the human race whose sin, woe, and hope for restoration are epitomised in Adam and Eve. Man is mentioned a further two times in that passage: 'one greater man' (line 4), and 'justify the ways of God to men' (line 26). In this case Milton is calling attention to the first two Adam's and then to the human race in general. This first disobedience is therefore not only the first in time; it is the source of all other disobedience. All Milton says about the theme of disobedience thus far is summed up in the one word, 'fruit', which is given to mean the edible fruit itself and fruit in the biblical sense, i.e. the 'fruits' of our labours are the product of our actions. Milton ties the two themes of 'Disobedience' and Divine Providence together here, and implies that it was not the momentary lapse of an unreasonable command but a violation of that divine order which God drew from the 'vast Abyss' which caused the Fall of Man. ...read more.

The final justification of God's ways is the manifestation of his grace in the redemption of man through the incarnation and crucifixion of Christ. On some levels this act of 'Providence' can be seen to balance out the 'disobedience' committed by Adam in Eden. In this act of atonement, Christ freed man from the inherited guilt of Adam's sin and made him more aware of God's infinite love than he had been before. So in the poem God's providence is seen just by the conclusion of the 'great argument' (1. Line 24): Satan fell because he merited more than he thought he got, and Adam in his redemption got more than he merited. However, the future that God has provided for Adam and Eve, whilst a glorious one, can never match the still greater future that they and their offspring might have enjoyed in a world without sin. To conclude, I would say that Milton 'justify[s] the ways of God to men', through the assertion of 'Eternal Providence', as he states in his Invocation that he will. The way Milton demonstrates the providence and forgiveness of God in the fall of man justifies his actions. Without the disobedience of Adam and Eve we would never have known the grace and mercy of God taking on the human form in Christ. No fall would have meant no Christ, and this seems the ultimate justification of 'the ways of God to men'. ...read more.