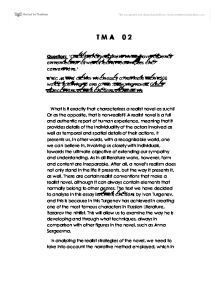 Character development in the novel depends on non-realist as well as realist techniques and conventions. Discuss this claim in an essay of not more than 1,500 words, referring to one of the following novels: Great Expecations, Fathers and Sons, F

Question:  ‘Character development in the novel depends on non-realist  as well as realist techniques and conventions.’

Discuss this claim in an essay of not more than 1,500 words, referring to one of the following novels: Great Expecations, Fathers and Sons, Frankestein.

What is it exactly that characterizes a realist novel as such? Or as the opposite, that is non-realist? A realist novel is a full and authentic report of human experience, meaning that it provides details of the individuality of the actors involved as well as temporal and spatial details of their actions. It presents us, in other words, with a recognizable world, one we can believe in, involving us closely with individuals, towards the ultimate objective of extending our sympathy and understanding. As in all literature works, however, form and content are inseparable. After all, a novel’s realism does not only stand in the life it presents, but the way it presents it, as well. There are certain realist conventions that make a realist novel, although it can always contain elements that normally belong to other genres. The text we have decided to analyze in this essay is Fathers and Sons by Ivan Turgenev, and this is because in this Turgenev has achieved in creating one of the most famous characters in Russian Literature, Bazarov the nihilist. This will allow us to examine the way he is developing and through what techniques, always in comparison with other figures in the novel, such as Anna Sergeevna.

In analyzing the realist strategies of the novel, we need to take into account the narrative method employed, which in this case is third person narration, although used in a slightly different way than usual. On the first page (‘We will acquaint the reader with him while he sits there’), as well as on p.5 (‘We see him in May 1859’) the narrator uses the pronoun ‘we’, conveying, thus, a sense of a sort of collective narrative voice, which acknowledges the reader’s presence. In this way, the latter is placed within the plot and setting of the ‘tale’ as if it were real. It is also important to note at this point, that third person narration implies a higher degree of reliability than first person in that we do not get a subjective version of events, rather we are somehow presented with the objectivity of the situation which, allows no room for uncertainty or ambiguity.

After having considered the realist techniques associated with the narrative voice, we will now proceed with assessing its effect on characterization, as well as character development. The term ‘characterization’ refers to the strategies that an author uses to present and develop the characters in a narrative, aiming at evoking the reader’s reaction to them, whether that is to identify, sympathize with, dislike or even pass judgement on certain actions of theirs, beliefs or moral values.

In Fathers and Sons Bazarov is the central character to the story, around whom the narrative revolves. This can be easily realized from quite early in the book (p.7-8), where we get a detailed description of his appearance (‘Long and thin, with broad temples, a nose flattened at the top and sharp towards the tip, with large greenish eyes and sandy-coloured drooping sideburns’), even his clothes (‘a tall man in a long, loose canvas garment with tassels’) and facial expressions (‘Bazarov’s thin lips made a slight movement’ or ‘the face was enlivened by a quiet smile and expressed self-assurance and intelligence’) as if we could really see him before us. In other words, he is being so strongly focalised by the narrator in order to be made believable and, consequently, arouse our first judgement upon him. I do not dare say that, as readers, we easily identify with him; rather, there is created within us a feeling of awe, respect or even desire to learn more about him and resolve this mystery that surrounds him even from this first encounter on p.7-8. It is also noteworthy that Bazarov is actually given a fictional biography with outstanding details- Marino, the town, Nikolskoe, his parents’ estate- with a sequence of settings which makes his presentation even more realistic. Evenmore, he is presented as having a psychological depth. We are ‘shown’ his beliefs, his nihilism, his absence of attachment to any kind of values or principles, through his own words (‘ I’ ve already told you that I don’t believe in anything...But science in general doesn’t exist at all’ p26). By reporting his speech directly, the narrator allows us to   draw our own conclusions about Bazarov’s attitudes.

As we proceed with reading the novel, however, we come to realise that Bazarov is a ‘round’ character (Forster, 1927). As a result of his experiences he undergoes a significant personal change. His feelings and attitude towards anything romantic, such as love, which are of total contempt, (‘Bazarov was a great admirer of women and women’s beauty, but love in an ideal (...) or a romantic sense he described as rubbish’ p.92) are clearly set out by the narrator himself. Nevertheless, after he meets Odintsova, he unconsciously starts to change and the author makes this known to the readers by giving them access to Bazarov’s consciousness (‘it even seemed to him that a change was occurring in Odintsova as well (...).But at this thought he would stamp his foot or grind his teeth and shake his fist at himself’ p.92). By these means, he apparently seeks to evoke the readers’ reaction to the hero; most probably sympathise with him for this fight occurring inside of him. Perhaps the climax of this development, however, is presented through the character’s own words when he finally declares his love to Odintsova (‘Then you should know that I love you, stupidly, madly(...).’ p.103). The method of ‘showing’ which the novelist chooses here is what makes this change sound and seem utterly realistic. There is no doubt that Bazarov has undergone a significant psychological development. Whether it is for better or worse, this is for the reader to judge and decide. ‘Round’ characters are described and developed in such a way as to achieve more than one dimensions, a physical and psychological complexity that looks a lot like that of real people we encounter in our everyday lives.

We should not omit the issue of setting, as well, which forms a key feature of the Realist novel: we are realistically placed temporally as well as spatially during this confession of Bazarov’s; it takes place in the afternoon of a rainy day in Odintsova’s room.

Bazarov’s development, through his contradictory behaviour, his self-control combined with his emotional suffering because of his love for Odintsova, his errors (like the one he made with Fenechka) and finally, his mortality, excite pity or sadness to the reader, making him realise the unchangeable life realities, raising, thus, a feeling of realism.

What about the rest of the characters, however? In particular, the female figures’ role? Let’s take the primary female presence in the novel, Odintsova. On pages 88-89 the writer ‘tells’ us quite a few things about her, although in a rather authoritative way, as if he spoke for herself, since she were unable to due to her lack of self-awareness. Furthermore, he links some kind of general attributes of hers to the whole female sex in an attempt to describe her only(‘ Like all women who had not succeeded in falling in love, she sought for something without knowing precisely what’ p.88). In other words, he just offers us a generalised summary of her intimate feelings without this being presented as something special. Unlike Bazarov, we don’t get a sense of her feelings, a struggle occurring inside of her, although we do have a great deal of ‘showing’, through her own words. By not offering us access to her consciousness the author evokes a mystery around her figure, even though our sympathy and identification go with the hero, who is presented more realistically. Odintsova is a ‘flat’ character; she is not constructed as an individually developing character, she seems to be a more static, or symbolic, image, functioning to guide the intellectual or emotional process through which Bazarov undergoes. This mystery and oddity of hers is hard to be perceived in real life as a ‘familiar’, ‘everyday figure’.

Another ‘flat’(or ‘static’) character is Yevdoxia Kukshina, who has ‘vowed’ to defend the rights of women ‘to the last drop of my blood’ (p.70).Although she is presented as radical, this radicalism is shown as shallow. According to the narrator’s  ‘telling’, she greets her guests ‘with excessively feminine casualness, without waiting for answers.’ (p.67-68). The narrator generalises this ‘feminine casualness’ to all women, implying their lack of serious concern. Kukshina’s presentation is nothing like ‘realistic’, since we obtain no feelings for or attitude towards her. She is not being focalised, rather she is used as a ‘tool’ towards Bazarov’s polarisation. After her description, there immediately comes Odintsova’s, whose views and way of thinking are quite the same. In other words, they are being parallelised in order to create a strong antithesis between themselves and the hero, Bazarov.

All in all, through the face of the central male figure of Fathers and Sons, Bazarov, and his development--presented through realistic methods--the writer is dramatizing the whole situation in contemporary Russia and maybe even foreseeing the upcoming change which was about to come in 1917. Female figures, nevertheless, are to be regarded not as individuals but rather as ‘types’. Their function is to be symbolic of truth, even though the goal has been the same; to reflect the orientation of contemporary thought.