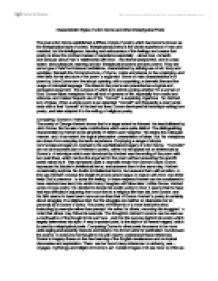 Characteristic Styles of John Donne and other Metaphysical Poets

Characteristic Styles of John Donne and other Metaphysical Poets: The poet John Donne established a different style of poetry which has become known as the Metaphysical style of poetry. Metaphysical poetry is the whole experience of man and mankind, but the intelligence, learning and seriousness of the feelings and means that poetry is about the profound areas of experience especially - about love, romantic and sensual; about man�s relationship with God - the eternal perspective, and to a less extent, about pleasure, learning and art. Metaphysical poems are lyric poems. They are some type of brief but intense meditations, characterized by striking use of wit, irony and wordplay. Beneath the formal structure, of rhyme, metre and stanza, is the underlying, and often less formal structure of the poem�s argument. Some of main characteristics in a poem by John Donne are: the abrupt opening with a surprising, a dramatic line and the usage of coloquial language. The ideas in the poems are presented as a logical and persuasive argument , the purpose of which is to aid his wooing whether for a woman or God. ...read more.

Donne expresses his doubts in intellectual terms, and answers them in the same way. Herbert occasionally explores his doubts in intellectual terms, but answers them with emotion. In this way Herbert conveys the insight that one cannot argue or reason with God; one either feels God�s presence , or loses the feeling. In these respects Herbert can be considered to have reached new land, into which Henry Vaughan will follow later. Unlike Donne, Herbert wrote no love poetry. He decided to devote his poetic works to God. It seems that he have had less difficulty in adjusting from court live to a religious life than did John Donne, and his faith seems to have been more secure than that of Donne. Herbert�s poetry is certainly about struggles of a religious kind, but the struggles are neither so desperate nor so personal as in Donne�s works. The poetry of Herbert is of a more instructive kind; instructing by example rather than precept. He writes for others, recording his struggles in order that others may follow his example. The thought in Herbert�s poems can be seen as a continuation of the thought in his sermons , and it is this purpose behind his poetry which largely determines his style. ...read more.

It will be seen however, that many of these images are found in Christ�s teaching, while others , or the same ones, may have aquired religious connotations. The reference to "thorn" and "bloud" in the Collar ironically seems to ignore the conventional religious symbolism of these terms. Another representative of metaphysical poets is Henry Vaughan, who shares Herbert�s preoccupation with the relationship between humanity and god. Both poets identify mankind as restless and constantly seeking a sense of harmony and fulfilment through contact with God. Vaughan uses imagery almost exclusevely from the natural world which is apprehended with a delight notably absent from his perseption of most other people. The clue to this lies in the Retreat where Vaughan notes that "shadows of eternity" were seen by him in a natural phenomena such as clouds or flowers. With Marvell, imagery is much more problematic. Unlike John Donne who scatters metaphors freely, Marvell is more selective and sparing. Very often the image is more memorable and striking than the idea it expresses, as with the "green thought in a green shade". In any case, with all of these poets, the use of metaphors serves, and is subordinate to, the total argument. word count: 1004 ...read more.