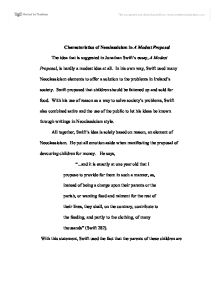 Characteristics of Neoclassicism in A Modest Proposal

Characteristics of Neoclassicism in A Modest Proposal The idea that is suggested in Jonathan Swift's essay, A Modest Proposal, is hardly a modest idea at all. In his own way, Swift used many Neoclassicism elements to offer a solution to the problems in Ireland's society. Swift proposed that children should be fattened up and sold for food. With his use of reason as a way to solve society's problems, Swift also combined satire and the use of the public to let his ideas be known through writings in Neoclassicism style. All together, Swift's idea is solely based on reason, an element of Neoclassicism. He put all emotion aside when manifesting the proposal of devouring children for money. He says, "...and it is exactly at one year old that I propose to provide for them in such a manner, as, instead of being a charge upon their parents or the parish, or wanting food and raiment for the rest of their lives, they shall, on the contrary, contribute to the feeding, and partly to the clothing, of many thousands" (Swift 282). ...read more.

But, anyone with a human mind could not possibly consider such a thing unless they truly based their thoughts on reason alone. Although Swift used reason to try and support his idea, he really had another idea in mind. He portrayed this with his use of another element of Neoclassicism; satire. With the purpose of venting his thoughts about the higher class people in Ireland and England, Swift included many satirical statements that made his proposal look as though it was something that really happened. He ridiculed England because Ireland and England are in constant disagreement. Swift showed this in one way by saying, "I have been assured by a very knowing American of my acquaintance in London, that a young healthy child, well nursed, is, at a year old, a most delicious, nourishing, and wholesome food, whether stewed, roasted, baked, or boiled" (Swift 283). ...read more.

The clever use of satire in this essay contributes to its classification as a form of Neoclassicism writing, but not alone. This essay was literature that Swift intended for the public, and this is another reason for its classification. Swift wrote A Modest Proposal with the intention of getting a public response. "I do therefore humbly offer it to public consideration, that of the hundred and twenty thousand children already computed, twenty thousand may be reserved for breed, whereof only one-fourth part to be males" (Swift 283). The essay is also shown to be for the public when Swift says, "I can think of no one objection that will possibly be raised against this proposal..." (Swift 286). With a not-so-modest suggestion, Swift expressed his views of England by using satire, and a solution to the problems that England has caused by using reason without emotion. He put this out for the public's opinion and the reaction was not quite what he had anticipated; but with these three elements, he created a piece of literature that is classified as Neoclassicism writing. ?? ?? ?? ?? ...read more.