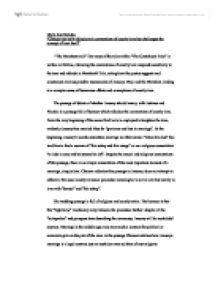 Chaucer not only ridicules tale conventions of courtly love but challenges the concept of love itself&quot; &quot;The Merchants tale&quot; like many of the tales within &quot;The Canterbury Tales&quot;

than of any religious importance: "I trowe it were to longe yow to tarie/ If I yow tolde of every scrit and bond". The language also supports the medieval anti-feminist view that women are just material goods to be transacted. A negative effect plays a key role in the play as the narrator is the merchant, a tradesman. His agenda is to exemplify whether a wife is a bargain or not, a good deal or bad deal. A sense of materialism in the tale is portrayed through the narrator; love is simply a financial exchange. The garden scene is another passage where the conventions of courtly love are humoured. This passage is compared to the secular expectations of the Romance of the Rose, a simple gesture of courtly romance to portray a man's love for his lady. ...read more.

At the beginning of the tale May was the "fressche" and meek character and as January longed for "lust" from her, May was "still as stone". Now, May has taken control it is her that "thrusts" with Damian and January is left behind. In this passage the Merchant has reached his purpose of his tale that of which women are "deceitful" and cunning. They are in no match compared to the Virgin Mary, even though no woman can be like her. As the Merchant reverses the audience of perception, we feel a sympathy swap for January whom now, "only for the love I had to thee". Ridiculing courtly love conventions and challenging love itself is clearly not the only way in which Chaucer creates humour in the Merchants prologue and tale but also by religious and courtly satire. However, it is effective in doing so, as Chaucer is able to employ many different devices to parody contemporary values and conventions. ...read more.