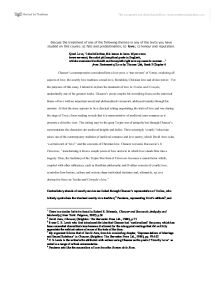 Chaucers presentation of Troilus and Criseydes love reflects the insurmountable influences of the conventional social ideologies in a patriarchy. Although the poem has a pre-Christian setting, many argue that Chaucer draws a message of Christian mo

Discuss the treatment of one of the following themes in any of the texts you have studied on this course: a) fate and predestination; b) love; c) honour and reputation. Quod Love, 'I shal telle thee, this lesson to lerne. Myne owne trewe servaunt, the nobel philosophical poete in Englissh, whiche evermore him bisieth and travayleth right sore my name to encrese...' from Testament of Love by Thomas Usk, Book 3 Chapter 4 Chaucer's contemporaries considered him a love poet, a 'true servant' of Venus, exploring all aspects of love: the courtly love tradition, sexual love, friendship, Christian love and divine power.1 For the purposes of this essay, I intend to explore his treatment of love in Troilus and Criseyde, undoubtedly one of his greatest works. Chaucer's poem couples his overriding focus on the universal theme of love with an important moral and philosophical viewpoint, addressed mainly through his narrator. At first the story appears to be a classical setting negotiating the trials of love and war during the siege of Troy; closer reading reveals that it is representative of medieval court romance as it presents a chivalric view. The setting may be the great Trojan war of antiquity but through Chaucer's representation the characters are medieval knights and ladies. Their seemingly 'courtly' behaviour arises out of the contemporary tradition of medieval romance and love poetry, which David Aers coins, 'a certain cult of 'love'2 and the concepts of Christian love. ...read more.

'Yee, nece, wol ye pullen out the thorn That stiketh in his hertre?' quod Pandare. 'Sey 'Al foryeve,' and stynt is al this fare!'16 Given his persuasion, it is difficult to see what else Criseyde could do as the daughter of the traitor, Calkas: she has no actual control over her life or love and its chance intervention when Troilus appears in the street below her window. The courtship of Troilus and Criseyde draws an interesting contrast with Diomede's wooing as well as reinforcing the concept that love is competitive, a power game 'played by men for their own satisfaction'17 and reflective of war.18 Both Troilus and Diomede are seen as predatory with the latter more so, as part of Criseyde's attraction for him rests in the fact that Troilus, his enemy, loves her and if he conquers her he conquers Troilus. The language is conventional for both:19 ...but Chaucer's irony is foregrounded in Diomede's conquest. Diomede may talk of... but we know that his aim is to 'net' Criseyde: 'To fisshen hre, he leyde out hook and lyne'20 In Book 3, however, the narrator, remarked how Troilus's heart is caught in 'Criseyde's net' and he is, 'narwe ymasked and yknet.'21 The juxtaposition of Diomede's eloquent, courtly language of love and his actual intent highlights Criseyde's position: the ideology of courtly love is an elaborate conceit and for all his obsequiousness, the knight holds the power over the lady who is essentially an object to be taken. ...read more.

In Chaucer's reworking of, Il Filostrato, however, he often uses public spaces for the lovers' meetings rather than private which supports Aers reading of the interrelatedness of the lovers and society. In keeping with the courtly love aesthetic, Chaucer uses the garden, a symbol of passion and fecundity, which Howes argues becomes a 'visual analogue for the ideal love affair. Boccaccio only uses the garden once at the zenith of the lovers' affair while Chaucer has used it some four times by then.'32 Yet, it offers only an illusion of safety that crumbles before social convention just as courtly love tradition's code of secrecy which seemingly protected Troilus and Criseyde eventually contributes to a situation which they cannot control. While the concluding lines of the poem with the anaphora compounding with the syntactical parallelism create a melodic mournful note: Lo, such an end had Troilus for love! Lo, such an end his valor, his prowess! Lo, such an end his royal state above, Such end his lust, such end his nobleness33 Chaucer's presentation of Troilus and Criseyde's love reflects the insurmountable influences of the conventional social ideologies in a patriarchy. Although the poem has a pre-Christian setting, many argue that Chaucer draws a message of Christian morality, through the representation of Venus, that the romanticised love of Troilus and Cressida, while very beautiful, does not have the protection of the Sacrament of Marriage, so ultimately fails. Such a reading ignores the destructive forces of war which destroy the 'hevene blisse' of the lovers but not Troilus's unshaken love for Criseyde. ...read more.