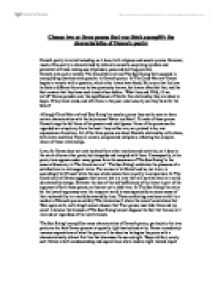 Choose two or three poems that you think exemplify the characteristics of Donne's poetry.

Choose two or three poems that you think exemplify the characteristics of Donne's poetry Donne's poetry is varied including, as it does, both religious and secular poems. However, much of his poetry is characterised by elaborate conceits, surprising symbols and persistent wittiness making use of paradox, puns and startling parallels. Donne's love poetry notably 'The Good-Morrow' and 'The Sun Rising' both succeed in exemplifying characteristics peculiar to Donne's poetry. In 'The Good-Morrow' Donne begins to wrestle with a question, which other lovers have faced. He is sure that the love he feels is different from any he has previously known, but lovers often feel that, and the fact remains that they have each loved others before. 'What thou and I Did, till we lov'd?' Donne ponders over the significance of this for the relationship they are about to begin. If they have loved, and left others in the past, what security can they have for the future? Although 'Good-Morrow' and 'Sun Rising' are secular poems they can be seen to share certain characteristics with the holy sonnet 'Batter my Heart'. To each of these poems Donne brings the full force of his passion and intelligence. None of the poems can be regarded as a simple cry from the heart: they neither are, nor pretend to be, raw expressions of emotion. ...read more.

'Why dost thou thus, Through windows, and through curtains call on us?' The line opens with great energy, in which is recognised not only Donne's determination to win an argument but also his triumphant mood as a successful lover. In 'Good-Morrow' too, the first line illustrates the remarkable directness of Donne's poetic voice. 'I wonder by my troth, what thou and I Did till we lov'd?' Several of Donne's poems are written in the dramatic and rhetorical form of an urgent and heated argument, notably 'The Flea' and 'To his Mistress Going to Bed' and 'Sun Rising is no different'. However in this case, Donne is questioning the sun rather than his lover. Donne can be seen to first draw in the reader with his sharp wit before launching his argument to the sun. Readers are at once impressed by the worldly assurance of this lover who professes to care nothing for the world. Despite his complaint that the sun has disturbed him and his lover, there is nothing sleepy about his opening outburst; he is already more alert and indeed more 'busy' than any of those who are reluctantly setting about their day's work. He is too arrogant to regard the sun as a possible threat to his happiness, treating it instead as an incompetent but harmless servant to be sent about his business 'go chide', 'go tell'. ...read more.

Humour is present in nearly all of Donne's poems although in 'Good-Morrow' it is more subtle than others such as 'Sun Rising'. The bungled 'country pleasures' of the past provide an opportunity for the lovers (and readers) to express their love in shared laughter. At the same time Donne shows himself acutely aware of the possibility that love will be invaded by fear 'And now good-morrow to our waking souls Which watch not one another out of fear'. He seems instinctively to recognise that while we cannot banish fear, we can nonetheless rise free of it. The effect of this recognition is profoundly emotional as the movement of verse signals the lovers' sudden emergence from suspicious watchfulness into a world of mutual contemplation. 'For love all love of other sights controls And makes one little room an everywhere'. The couple's literal awakening after a night together is made to suggest the awakening of their souls into a new clarity of feeling. This metaphor is not original to Donne but the poem is so characteristic of him because the images are not used merely decoratively, to give poetic status to a simple idea but rather, argumentatively, to reveal more about the experience of love than was at first evident. Despite their differences both 'The Good-Morrow' and 'The Sun Rising' can be seen to exemplify Donne's poetry sharing, as they do, complex metaphors and challenging perspectives on love. ...read more.