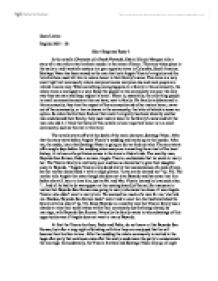 Jason Levine English 2025 - 20 Short Response Essay 1 In the novella Chronicle of a Death Foretold, Gabriel Garcia Marquez tells a story of a man whom two brothers murder in the name of honor. This story takes place in the early to mid twentieth century in a poor agrarian town in Columbia, South America. Santiago Nasar has been named as the man that took Angela Vicario's virginity and the twin brothers must kill him to restore honor to their family's name. This town is a very small tight knit community where everyone knows everyone else and most people are related in some way. When something wrong happens to a family in this community, the whole town is wronged in a way. Since the people in this community are poor the only way they can earn and keep respect is honor. Honor is, essentially, the only thing people in small communities such as this one have, next to family. If a family is dishonored in this community, they lose the respect of the community and either restore honor, move out of the community, or live in shame in the community, the latter of which is never an option. ...read more.

'He seemed too much of a man for me,' she told me. Besides, Bayardo San Roman hadn't even tried to court her, but had bewitched the family with his charm" (p. 34). Since Bayardo is a wealthy man the Vicario family has a chance to raise their social status within their community just by being related, by marriage, with Bayardo San Roman. Naturally the family wants to take advantage of this opportunity even if Angela does not want to marry Bayardo. At first the Vicario brothers, Pedro and Pablo, do not know or like Bayardo San Roman, but after a long night of drinking with him they are overjoyed that he will become their brother-in-law. After the wedding the whole community is invited to the huge after party that continues even after the newly-weds leave the party to consummate the marriage. Coincidentally, the Vicario brothers and Santiago Nasar stay up all night drinking at the local brothel unaware that the next morning they will kill Santiago. When Bayardo and Angela try to consummate the marriage, he finds out that she is not a virgin and he returns her to her family in disgrace. ...read more.

In conclusion, the whole book revolves around the theme of how important honor is to a small, impoverished community such as the one in this book. When you are poor, you have no important assets except for your family and your honor. If you do not have honor then most likely your family does not just by association. So if you have no honor, then you have nothing. The murder of Santiago Nasar was an honor killing. Even though the family moved away after the murder it was expected by most people in the community as the only way to restore the good name of the family. Honor killing was an excepted form of civil duty that the men in a family must perform if they do not want to be labeled as outcasts and shunned in the society. Since the brothers only received three years in prison, the reader can tell that the honor killing was an excepted form of retribution by a family. The reader and the narrator never find out why Angela Vicario named Santiago Nasar, but the gossip in the town says that it was to protect her first lover, which is never confirmed because Angela never returns to her supposed lover after the killing. ...read more.