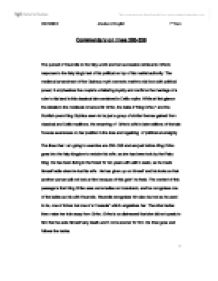 Commentary on lines 305-338 of Sir Orfeo. While at first glance the details in the medieval romance Sir Orfeo, the ballad &quot;King Orfeo,&quot; and the Scottish poem King Orphius seem to be just a group of similar themes gained from classical and Celtic tradition

The pursuit of Heurodis to the fairy world and her successive retrieval is Orfeo's response to the fairy king's test of his political on top of his marital authority. The medieval amendment of the Orpheus myth connects matrimonial love with political power; it emphasizes the couple's unfaltering loyalty and confirms the marriage of a ruler to his land in this classical tale contained in Celtic myths. While at first glance the details in the medieval romance Sir Orfeo, the ballad "King Orfeo," and the Scottish poem King Orphius seem to be just a group of similar themes gained from classical and Celtic traditions, the renaming of Orfeo’s wife in later editions of the tale focuses awareness on her position in the loss and regaining of political sovereignty.

The lines that I am going to examine are 305- 338 and are just before King Orfeo goes into the fairy kingdom to reclaim his wife, as she has been took by the Fairy King. He has been living in the forest for ten years with wild beasts, as he made himself exile when he lost his wife. He has given up on himself and his looks so that another woman will not look at him because of this grief he feels. The content of this passage is that King Orfeo sees some ladies on horseback, and he recognises one of the ladies as his wife Heurodis, Heurodis recognises him also but not as he used to be, one of riches but one of a “messais” which anguishes her. The other ladies then make her ride away from Orfeo; Orfeo is so distressed that she did not speak to him that he asks himself why death won’t come sooner for him. He then goes and follows the ladies.

The style of this passage is the use of narrative, describing what Orfeo sees and does. It also has indirect narrative, speaking as though he is talking to himself or maybe to the reader in lines 331-338. By using indirect dialogue towards the end of the passage it makes the reader feel sympathy with Orfeo, and shows us how faithful he is to his wife.

The tone of this passage switches from cheerful to cheerless. At the beginning of the narrative he is talking in happiness using positive words such as “jolif” and “gode” at seeing the ladies hunting. The tone then starts to become more negative as the couple are unable to speak and his wife cries, to an even more distraught Orfeo wanting to end his life because of his misery.

Throughout this passage there is a repetition of the word “Allas”, it is used 4 times. We also see this 4 times between lines 107-127, and also twice in lines 176 and 544. This word is used whenever the person saying this word is distraught, it is said when King Orfeo first finds out that his wife has been threatened by mutilation by the fairy King and the only way to prevent this is to let her go with the fairy King; it is then used again when the steward thinks the King is dead. It is a word used when feeling upmost pain and suffering. It is as though a new chapter is about to begin in the poem after these words are said. The first time the word is used the King then gives up his title and Kingdom and goes into the wilderness not expecting to see his wife again. he says it again once he has seen his wife and feels grief because she did not talk; which then sees a new chapter in him following her and regaining his wife from the King by been a disguised minstrel. Finally the last time it is used when the King tests the steward’s loyalty and pretends King Orfeo is dead disguised as a poor man, which then sees a new chapter in the King regaining his throne. It also could mean that is shows a test of devotion when these words are said, first of all a test of loyalty to his power as a king in having to let his wife and kingdom go. The second time is a test to himself and his wife as a true husband, and the third time a test of loyalty to the steward. This is one of the main themes that ruins throughout the poem and using the word “Allas” seems to indicate when it is been tested.

The repetitive use of different birds in this section “faucon”, “brid”, “maulardes, hayroun and cormeraunt” is very paradoxical as birds are free. The author even describes the ladies as lovely and happy as bird on branch 304-305. It is ironic that birds are used because it insists the ladies are free and can fly away when they like, there is no description of the birds been caged up; yet when Heurodis sees Orfeo she cannot talk to him and she cries she is then ushered away from him insisting she is in fact not free like a bird.

It is also surprising that there is no men hunting, there is only ladies. During the time this poem was written it was very unusual for women to hunt alone in a forest as it was dangerous. This is a direct comparison to when Orfeo is describing what type of hunt he has seen previous in lines 281-302 to the hunt he sees by the ladies, as he describes of ten hundred knights go hunting with the fairy king, not women alone. It goes from past tense, to present tense which may be an indication of how his life then is beginning to go into his favour, or how he gets a new lease of life on seeing his wife, because he sees Heurodis and then ultimately he saves her and gets his Kingdom back.

In this passage we also see King Orfeo laugh for the first time, (314) this could be because that he is reminded of his previous life as a king and things he used to do, which also could be a reason to give him strength to regain his wife as he misses how his life was. it could also be seen as paradoxical as it is the first time he has laughed in ten years, which means it is the first time he has felt joy in ten years. Which then comes with a twist as he sees his wife for the first time in ten years, which he should also be happy at too, but it saddens him. he may elaborate on this sadness  more strongly because he has just had this bit of happiness he was experiencing taken away from him.

When Heurodis sees Orfeo she weeps at his disfigurement (325-328), this is a mirroring of what Orfeo does ten years prior over concern for Heurodis’s disfigurement (196). Orfeo’s transformation was to discourage another woman’s interest in him, apart from his own wife and it is proven here he has successfully filled his aim (211). Heurodis's fidelity and compassion becomes the model for Orfeo’s own actions. The king reflects the behaviour and feelings of his wife, in the representation of marital and political fidelity.

When King Orfeo sees Heurodis in the forest in lines 331-334 they both recognise each other automatically, the recognition flows from the deep mutual gaze of two people who are very much in love with each other. Yet when Orfeo sees Heurodis in the castle 405-408 he does not recognise her because of the way she looks only by the outward trappings of her former life “bi her clothes he knewe that it was he.” There is no sense of any reciprocal recognition. This may indicate that whilst Heurodis and the other ladies are out of the fairy kingdom they regain their beauty and are not disfigured. But whilst in the fairy land they are a figure of mutilation of what the King sees as he enters.

So, in conclusion, what we see in this passage is a turn in the plot, an ending of a chapter to the beginning of a new one. With the indication of the word “allas” this passage shows how true and loyal King Orfeo and Queen Heurodis are to each other. He had given up all hope on himself but he never gave up hope on his queen.