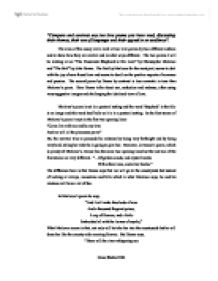 &quot;Compare and contrast any two love poems you have read, discussing their themes, their use of language and their appeal to an audience&quot;.

"Compare and contrast any two love poems you have read, discussing their themes, their use of language and their appeal to an audience". The aims of this essay are to look at two love poems by two different authors and to show how they are similar and in what ways different. The two poems I will be looking at are "The Passionate Shepherd to His Love" by Christopher Marlowe and "The Bait" by John Donne. The first by Marlowe for the most part, seems to deal with the joy of new-found love and seems to dwell on the positive aspects of romance and passion. The second poem by Donne by contrast is less romantic in tone than Marlowe's poem. Here Donne talks about sex, seduction and sadness; often using very suggestive images and challenging the idealised view of love. Marlowe's poem is set in a pastoral setting and the word 'shepherd' in the title is an image and this word itself tells us it is in a pastoral setting. In the first stanza of Marlowe's poem it says in the first two opening lines: "Come live with me and be my love And ...read more.

Donne is trying to say that she will get in the water and her eyes alone will warm the water more than the sun, which is an example of hyperbole. He says that when she does get in the water and baith, the fish will nibble. This creates a raunchier image, also it brings in the element of physical contact. In the next stanza Marlowe then says, "A gown made of finest wool Which from our pretty lambs we pull" This suggests that not only will he protect her but also he will provide her with wealth in an attempt to influence her decision. In Donne's the approach is different. In the fourth stanza Donne says, "If thou, to be seen be'st loth, By sun or moon, thou darken'st both" Donne's message, which he is trying to put across, is that the sun and moon are bright, but you are brighter. As you can see Marlowe's way of wooing her is very different to Donne's way. Marlowe has a flattering approach whereas Donne makes his point very clear in the start of the poem, which is come to bed with me. ...read more.

From this it is clear that he is love sick. It is very clear that Marlowe's approach is innocent and evokes idyllic images. Donne is much more down to earth and realistic using words like "coarse" and "bold" and "slimy". His poem is therefore more sensuous, suggestive. Marlowe employs language, which maintains the sense of innocent beauty. He uses words like "pretty", "purest", "fragrant", and "finest". The rhyme scheme in both poems is very strong to make a good argument because in their own ways they are both out to woo the woman and also to show their passion and determination. Also in Donne's poem he is very precise and thorough about what he says, getting to the point very quickly. Donne uses the same rhyme scheme as Marlowe but to different affect. This is underpinned by his use of words that would not normally be associated with love poems such as "treacherously", "traitors", "strangling" and "deceit". We have analysed two very different poems yet we have demonstrated that there exist many points of contact. Ultimately, the poems are both about love and this theme blinds them most closely. No two love poems are alike, but this only serves to illustrate the many-faceted nature of love itself. Omar Shahid 10H ...read more.