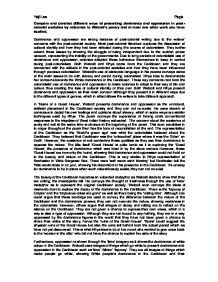 Compare and contrast different ways of presenting dominance and oppression in post-colonial societies by reference to Walcott's poetry and at least one other work you have studied.

'Ruins' could suggest the physical ruins of the Great House but also the ruins left behind from the actual period which we have not yet discovered. This is what Rhys tries to do in her novel; she wanted to give voice back to the 'women in the attic' who did not have the chance to explain her side of the story. Furthermore, oppression is shown through the 'lime' imagery as it shows the dominance of white colour in the Caribbean. Walcott uses images of things which go white to present dominance and oppression in the Caribbean such as 'lime' 'Albion' 'leprosy'. They are all images of things which make people go white, showing White people's dominance in the Caribbean and their colonisation as well as slave ownership. Through these use of images, Walcott conveys his own thoughts and opinion about the issues to do with slavery and its dominance and oppression in the Caribbean. In similar, Rhys presents Rochester's appearance in the Caribbean as an 'invasion' and taking dominance in the household. Furthermore, Rochester's narrative on his view of the Caribbean tended to be quite anglicized. He felt that the property looked like an 'imitation of an English summer house'; this is quite similar to Walcott's use of colour imagery and Rochester tries to find his dominance in the house by anglicising things in accordance to his preference. ...read more.

In conclusion, Walcott presents dominance and oppression in the post-colonial society as a negative existence, although there seems to be some sense of grief and reconciliation. It is interesting to see how the similar view given by Walcott towards the negativity of dominance/oppression existence is also explored through Rhys. However, Rhys uses the format of the three parts in the novel, which can be seen as a way of showing dominance and oppression. Although Part one starts with Antoinette's narrative, Rochester soon takes over in which the story is told in accordance of his conscious and feelings. Also, the fact that it is in the middle of the two parts of the Caribbean voices, it could suggest the White male dominance over the other narratives. Furthermore, Part 2 is the longest part of the three, showing the White man's dominance over the Caribbean oppressing Antoinette to be more silent then she had probably given the opportunity to speak. On the other hand, Walcott's presentation of dominance and oppression are more subtle as his poems are mostly written in the style of stream of consciousness thus the readers can view different perspectives and approaches towards dominance and oppression. Therefore, Rhys and Walcott present similar settings to the presence of dominance and oppression, but how their attitudes towards them are quite dissimilar. ?? ?? ?? ?? Yeji Lee Page2 ...read more.