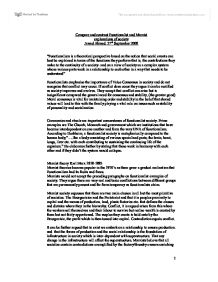 Compare and contrast Functionalist and Marxist

Compare and contrast Functionalist and Marxist explanations of society Jawad Ahmed, 27th September 2008 "Functionalism is a theoretical perspective based on the notion that social events can best be explained in terms of the functions they perform-that is, the contributions they make to the continuity of a society- and on a view of society as a complex system whose various parts work in a relationship to each other in a way that needs to be understood" Functionalists emphasise the importance of Value Consensus in society and do not recognise that conflict may occur. If conflict does occur they argue it can be rectified as society improves and evolves. They accept that conflict can arise but is insignificant compared the general need for consensus and stability, (the greater good) ...read more.

Marxist theory Karl Marx 1818-1883 Marxist theories became popular in the 1970's as there grew a gradual realization that Functionalism had its faults and flaws. Marxists would not accept the preceding paragraphs on functionalist examples of society. They argue there are very real and basic conflictions between different groups that are permanently present and far from temporary as functionalists claim. Marxist society espouses that there are two main classes in all but the most primitive of societies. The Bourgeoisies and the Proletariat and that it is peoples proximity to capital and the means of production, land, plants factories etc. that defines the classes and dictates where they in the hierarchy. ...read more.

Capitalism survives because of the role of superstructure which in turn is formed by its infrastructure they argue and that the Bourgeoisie have monopolized political power, the judicial system and other institutions to exert control. This power is legitimized by the ruling elite who then indoctrinate (with a false ideology) the proletariat by providing a false picture to prevent them seeing the contradictions and thus creating a false consciousness. Hence, conflict CONCLUSION Functionalism Consensus Theory highlights and accentuates the Protestant work ethic of shared values and normative behavioural patterns such as hard work, harmony, cohesion integration and equilibrium Marxism highlights the differences and contradictions between groups and individuals and uses concepts such as control, coercion, power, constraint, discensus and change. That conflict is inevitable ?? ?? ?? ?? 1 ...read more.