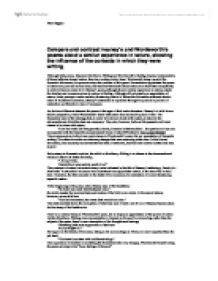 Compare and contrast Heaney&amp;#146;s and Wordsworth&amp;#146;s poems about a similar experience in nature, showing the influence of the contexts in which they were writing.

Compare and contrast Heaney's and Wordsworth's poems about a similar experience in nature, showing the influence of the contexts in which they were writing. Although both poems, Heaney's Blackberry Picking and Wordsworth's Nutting, display fundamentally different attitudes toward nature, they also contain similar ideas. Wordsworth being a poet of the Romantic Movement, his poem conveys the qualities of this genre. Romanticism appreciates the power of nature as a pure and divine force, and believes that adults should return to a child-like susceptibility in order to become closer to it. Heaney's poem, although about a similar experience in nature, rejects the idealism and reverence given to nature in Nutting. Although still principally an appreciation of nature, it also portrays a more realistic, threatening side to it. Where the Romantics enthused about a return to childhood innocence, Heaney's naturalism is expressed through his poem as a process of maturation and therefore a loss of innocence. An obvious difference between the poems is the ages of their main characters. Heaney's is told from a child's perspective, while Wordsworth's deals with nature from an adult's point of view. The Romantics were of the ideology that, in order to be truly in touch with nature, a return to this aforementioned child-like state was necessary. They also, however, believed the peasants and lower classes to be close with nature, "Low and rustic life was generally chosen, because in that condition...the passions of men are incorporated with the beautiful and permanent forms of nature"(Preface to The Lyrical Ballads) ...read more.

This use of emotion is a large influence on the structure of Romantic poems. In contrast with Heaney's, Wordsworth's poem is free of structure or form, instead utilising a more flowing style of writing. This approach to poetry is part of the Romantic ideology, their belief that a poem is "a spontaneous overflow of the imagination." The poem is taken from the anthology The Lyrical Ballads, a ballad being a more narrative, less structured form of verse. Because of their flowing rhythm, ballads were often converted into folk songs, the 'Lyrical' of the title reflecting this musicality. Heaney's poem is more regularly structured, with stanzas of equal length. This is done in order to properly reflect the change and progression of the poet's emotion. His is not a "spontaneous overflow," but instead conveys a very sharp change in attitude toward nature. The emotions to be found in each poem are very different. The positive emotion evident in Blackberry Picking is one of lust and passion, with an intensifying image of blood throughout. In the beginning, the blackberries are described as if "summer's blood" was inside them, like they are the embodiment of the summer. This image progresses through lust, "Leaving stains upon our tongue and lust for Picking," And, at the end of the first stanza, even murder, "our palms sticky as Bluebeard's." ...read more.

He retains his idealistic view of nature, and his high hopes are more than satisfied. "- blessed With sudden happiness beyond all hope." His Romantic view of nature as a great pure force has not been tarnished. The corruption in Blackberry Picking is brought on by nature itself, by the decay of life. The corruption seen in Nutting, however, is brought on by human intervention- nature is not the one at fault. When Wordsworth actually takes the nuts from the trees, his actions seem ill fitting; "And dragged to earth both branch and bough, with crash And merciless ravage." The onomatopoeic word "crash" is out of place, as is "merciless ravage." They seem to have more in common with the emotion in Heaney's poem rather than the serene setting of Wordsworth's. In the final stanza of Nutting, Wordsworth is imparting a message, fitting in with the 'prophet of nature' tag that Romantic writers carried. He is telling others not to do what he did, to respect nature. "Touch- for there is a Spirit in the woods." Again he emphasises the spiritual quality of nature, it is not just a backdrop, it is alive. Heaney, however, reaches the conclusion of perpetual disappointment in nature, with the closing line "Each year I'd hoped they'd keep, knew they would not." This is what initiates the death of his naturalism, he depicts nature as the one at fault, and in his eyes it has failed to live up to expectations. Peter Higgins ...read more.