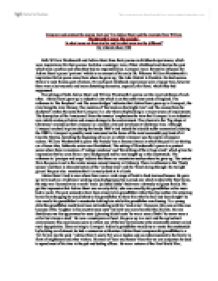 Compare and contrast the poems 'part one' by Adrian Henri and the excerpts from William Wordsworth's poem 'the prelude'. In what ways are they similar and in what ways are the different? By: Zahrah.Macci 10H Both William Wordsworth and Adrian Henri base their poems on childhood experiences, which were inspirational for their poems. Each has a nostalgic view of their childhood and idealise the past which were carefree and when they had no responsibilities. Liverpool was a formative influence for Adrian Henri's poem 'part one' which is an account of his early life. Whereas William Wordsworth's inspiration for his poem came from where he grew up, The Lake District in Cumbria. He has become Britain's most famous poet of nature. For each poet childhood experiences were a happy time; however there were also traumatic and more disturbing memories, especially for Henri, which they had suppressed. The settings of both Adrian Henri and William Wordworth's poems are the exact antithesis of each other. Adrian Henri grew up in industrial city which is on the north-west coast of England. The reference to 'the ferryboat' and 'the seven bridges' indicates that Adrian Henri grew up in Liverpool, the river being the river Mersey. The mention of 'the boats on the bright river' and 'the cranes from the dockyard' evokes the sense that Liverpool is a city where shipbuilding is a major source of employment. ...read more.

On returning home from shopping he would shout to his grandfather to show him what he had 'just been bought' he also recalls his grandfather's moustache tickling him whilst his grandfather was kissing. To a young child the grandfather could have been intimidating with his 'load voice'. However, this was not the case because of the 'laughter in his country mans eyes' his bark was more harmful than his bite. He was fastidious over his appearance he wore 'gleaming black boots' he was a man of habit 'he never wore a collar but always a stud.' He was a countryman at heart. He grew up in a rural and the agricultural environment. His experiences seem to reflect one of the key movements in the nineteenth century called rural depopulation. Once arriving to Liverpool Adrian's grandfather would try re-create the countryside by building on allotment, he had a connexion with nature Adrian Henri compares his grandfather to a 'tall fir tree inn the park.' Adrian Henri's uncle Bill was a burden and an embarrassment to the family in front of neighbours and other visitors. He smelt of 'bear and horses' from this we can conjecture he used to spend most of his time in the pub and betting offices. ...read more.

Wordsworth hastly returned the boat which indicates how frightened he was at the time. After this incident Wordsworth's mood changed significantly. 'part one' by Adrian Henri was not actually thought out, the poem is written in an unstructured way with no logical sequence, there is no punctuation, virtually no capital letters apart fro m the names. It is written in a stream of consciousness with a series of disconnected thoughts, whereas Wordsworth's poem. 'The prelude' is a long autobiographical poem. It is written on a specific childhood experience. Both poems are about childhood memories but clearly there are differences, the settings of both poems, the way the poems are written and the mood and atmosphere of both poems differ. The way that Liverpool had all changed, the place Henri grew changed entirely, everything he had remembered had changed or gone. Houses had been knocked down 'ugly flats' the people who had lived there had also gone. Henri's Liverpool had dramatically changed into an environment he did not remember. The Lake District is a renowned area of England for its natural scenery beauty, thousands of people visit from England and all over the world. Wordsworth was the one who 'made it popular.' In my opinion I prefer 'part one' by Adrian Henri because it does not focus on a specific memory. It is easier to understand as it is not as long as 'the prelude' which is on specific memories. By: Zahrah.Macci 10H ...read more.