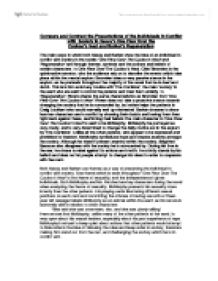 Compare and Contrast the Presentations of the Individuals in Conflict with Society in Kesey's One Flew Over the Cuckoo's Nest and Barker's Regeneration The main ways in which both Kesey and Barker show the idea of an individual in conflict with society in the novels 'One Flew Over The Cuckoo's Nest' and 'Regeneration' are through themes, symbols and the actions and beliefs of certain characters. In One Flew Over The Cuckoo's Nest, Chief Bromden is the opinionative narrator, who the audience rely on to describe the events which take place within the mental asylum. Bromden takes a very passive stance in the asylum, as he pretends throughout the majority of the novel that he is deaf and dumb. This lets him avoid any trouble with 'The Combine'; the main 'society' in the ward who are said to control the patients and treat them unfairly. In 'Regeneration,' Rivers shares the same characteristics as Bromden from 'One Flew Over The Cuckoo's Nest'. Rivers does not take a proactive stance towards changing the society that he is surrounded by, but rather helps the patients in Craig Lockhart who would normally end up mistreated. ...read more.

When noticing the unusual laughter from McMurphy, Bromden recalls when his father and relatives would use laughter as a means of insulting the government to show them that they would not let themselves be controlled by them: "I forget sometimes what laughter can do." McMurphy states that nobody in the ward is able to prevent themselves from being controlled by The Combine if they are not able to laugh allowed. This is another demonstration of McMurphy being in conflict with society, as he is presented as the only apparent character rebelling against the pressure society is placing on the patients. Another motif in 'One Flew Over The Cuckoo's Nest' is size. Throughout the novel, we notice that Bromden measures size by the amount of power and authority they exert, rather than the characters' actual size. For example, Bromden, though he is six feet seven inches tall, feels much smaller and weaker then the staff in The Combine: "I used to be big, but not no more." Here we see the effects that The Combine has had on Bromden's confidence, through the negative declarative 'but not no more'. ...read more.

Physician heal thyself." Barker's reference to the Gospel quotation presents Rivers feeling plagued by his emotions Prior's war story, showing the grotesque nature the men go through on the front line. Rivers struggles to force himself not to think about the story, not wanting to have to take leave because of his mental state. Rivers knows that his job is to look after the patients and help them recover, but because he himself is having troubles agreeing with the beliefs, he is not sure if he is able to also help them. Rivers' confused emotions show him to be an individual in conflict with society, being the only doctor in Craiglockhart to consider the patients feelings and siding with them over attitudes towards the war. Overall, Kesey and Barker use different themes, motifs and characterisation to best show the individual in conflict with society. Both 'One Flew Over The Cuckoo's Nest' and 'Regeneration' compare in the sense that the society which the characters live pressurise individuals to fall in line with the stereotypes and rules that they set. However, where as in 'One Flew Over The Cuckoo's Nest' this is shown through the themes of sexuality and the motifs of laughter and size, 'Regeneration' shows the individual rising against the beliefs of society through the theme of madness and the motif of emasculation. ...read more.