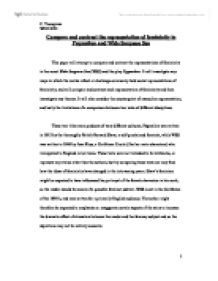 Compare and contrast the representation of femininity in Pygmalion and Wide Sargasso Sea This paper will attempt to compare and contrast the representations of femininity in the novel Wide Sargasso Sea (WSS) and the play Pygmalion. It will investigate any ways in which the works reflect or challenge commonly held social representations of femininity, and will compare and contrast each representation of femininity and then investigate any themes. It will also consider the counterpoint of masculine representation, and lastly the limitations of a comparison between two texts of different disciplines. These two titles were products of very different cultures; Pygmalion was written in 1912 by the thoroughly British Bernard Shaw, a self-proclaimed feminist, while WSS was written in 1966 by Jean Rhys, a Caribbean Creole (like her main characters) who immigrated to England in her teens. These texts were not intended to be textbooks, or represent any views other than the authors, but by comparing these texts we may find how the ideas of femininity have changed in the intervening years. Shaw's feminism might be expected to have influenced his portrayal of the female characters in his work, so the reader should be aware of a possible feminist subtext. ...read more.

There are many different representations of femininity in these works, and I feel the best way the explore femininity in these works will be to analyse the female characters relationships, and will analyse first the ways the femininity of the main characters is represented in each. In Pygmalion, Eliza's femininity is highlighted firstly by her work; she is referred to in the play at first as simply 'The Flower Girl', and is shown to use her gender to exploit the presumed chivalrous nature of the men; she deceitfully tells Pickering she's 'short for my lodgings', despite having previously said she could change half a crown. There are also repeated worries that Eliza is or could become a prostitute; Eliza herself recognises this, by her statements that she is 'a good girl'. After all, at the start of her training Eliza's aim is to work in a flower shop, yet there is no obvious position ready for her, and when her training is complete she feels unable go back to selling flowers on street corners. ...read more.

Eliza's turning point in the story, where she starts to stand up to Higgins, comes just completing her training and winning Higgins' bet. This is the point where she would be starting her new life, and so it makes sense for her to break off from Higgins. Next I will study the various familial relationships between the female characters. I will begin by analysing the representation of motherhood, a strongly represented relationship in both works. The two main characters in each book each come from essentially single-parent families. In WSS, Antoinette is depicted as being rather attention-starved by her mother Annette, which might explain her hunger for affection with her husband later. This seems similar to her husbands' relationship with her father, whom he feels has disinherited him; but he reacts by masking his emotions, and seems to feel a loving relationship is unnatural. Antoinette does not display any real affection of her own towards her family, and never mentions playing with either her mother or her brother. Higgins seems to have had a similar relationship with his mother in Pygmalion, to whom he displays an almost infantile attachment. ...read more.