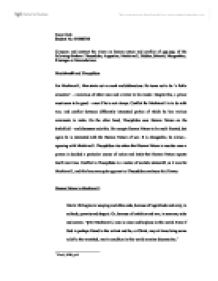 Compare and contrast the views on human nature and conflict of any two of the following thinkers: Thucydides, Augustine, Machiavelli, Hobbes, Schmitt, Morgenthau, Kissinger or Mearscheimer. Machiavelli and Thucydides

Euan Clark Student No. 040008140 Compare and contrast the views on human nature and conflict of any two of the following thinkers: Thucydides, Augustine, Machiavelli, Hobbes, Schmitt, Morgenthau, Kissinger or Mearscheimer. Machiavelli and Thucydides For Machiavelli, Man starts out as weak and defenceless. He turns out to be 'a fickle simulator' - avaricious of other men and a traitor to his leader. Despite this, a prince must seem to be good - even if he is not always. Conflict for Machiavelli is to do with war, and conflict between differently interested parties of which he has various comments to make. On the other hand, Thucydides sees Human Nature on the battlefield - and discusses only this. He accepts Human Nature to be multi-faceted, but again he is interested with the Human Nature of war. It is changeable, he allows - agreeing with Machiavelli. Thucydides also states that Human Nature is resolute once a person is decided a particular course of action and lastly that Human Nature repeats itself over time. Conflict in Thucydides is a matter of realistic statecraft, as it was for Machiavelli, and this becomes quite apparent as Thucydides continues his History. Human Nature in Machiavelli Man's life begins in weeping and often ends, because of ingratitude and envy, in solitude, poverty and despair. Or, because of ambition and war, in screams, sobs and sorrow. � For Machiavelli, man is alone and helpless in this world. ...read more.

For Machiavelli, religion is not the be all and end all, but it is somewhat important: he revives the use of pagan 'Fortuna' (fortune) as something that is essentially uncontrollable, but may be granted if virt� is present. Yet he uses God throughout The Prince - an apparent anomaly. Human Nature in Thucydides Thucydides says, after describing the Corcyra civil war: ...with the ordinary conventions of civilized life thrown into confusion, human nature, always ready to offend even where laws exist showed itself proudly in its true colors, as something incapable of controlling passion, insubordinate to the idea of justice, the enemy to anything superior to itself; for, if it had not been for the pernicious power of envy, men would not have so exalted vengeance above innocence and profit above justice.19 We are able to judge for ourselves that 'human nature' necessarily depends upon all the forces surrounding it, and this The History agrees. Additionally, Thucydides is thus relating to us how the 'warring' part of human nature reveals itself and how it is used to form opinions on its course of action: But what of Thucydides' own view of...human character as it affects the course of events? The generalisations in the narrative about human nature or the human condition...imply that although human behaviour changes according to changes in attendant circumstances, the 'nature of men' can be made the basis of predictions.20 This is a commonly agreed point throughout the text. ...read more.