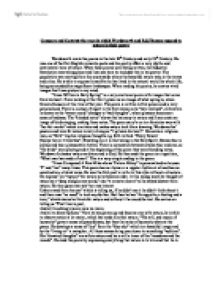 Compare and Contrast the ways in which Wordsworth and R.S.Thomas respond to nature in their poetry.

Compare and Contrast the ways in which Wordsworth and R.S.Thomas respond to nature in their poetry Wordsworth wrote his poems in the late 18th Century and early 19th Century. He was one of the first English romantic poets and his poetry offers a very idyllic and sentimental view of nature. When these poems were being written, the Industrial Revolution was taking place and I can see how he includes this in his poetry. The population was moving from the countryside where the beautiful nature was, to the towns and cities. He is able to express himself as he has lived in the natural world his whole life, being surrounded by magnificent landscapes. When reading his poetry, he creates vivid images that I can picture in my mind. "Lines Written in Early Spring" is a very emotional poem with images that come from his heart. From looking at the title it gives me an image of what spring is, when flowers blossom at this time of the year. The poem is written in first person and is very personalised. There is a sense of regret in the first stanza as he "sate reclined", alliteration is shown as the "sweet mood" changes to "sad thoughts", where pleasure becomes a sense of sadness. ...read more.

By comparing these two poems, I notice that nature is his inspiration and relates nature as God. In both poems there is time when nature is not noticed as the most important thing but then he realises it is. There is also a religious element in his poetry, how he uses faith which represents having faith and belief in nature. He thanks God for creating this natural environment. But due to the Industrial Revolution he feels that man has effected nature by moving away from the rural areas to the urban areas. The poems constructions are different from each other as Lines written in early spring has 5 stanza's, where as A few miles above Tintern Abbey is a blank verse that has no regular rhythm. Wordsworth classes nature as a god like quality, nature is harmony and u can feel at ease with it. R.S.Thomas was a modern poet writing in the 20th Century, so his language he uses is a lot more understandable then Wordsworth. We can tell that he has a lot of love for Wales as he focuses on the Welsh hills where he lived and worked in his poetry. ...read more.

It seems that he is happy within the "tall hedges" as "he never looks up", if he did look up it would suggest he needed freedom. Soil is everything to him as it represents his life and his upbringing. He then ends the poem with "warm soil" a comforting image. R.S.Thomas' poetry is more of his experience with everyday interactions of nature. It is a lot more practical what he does and it is easier to understand. He writes about the things that are changing during the 20th Century, as technology is improving and becoming more advanced. Wordsworth seems to me to be a much wiser poet, who makes most of his words count and have a meaning. Nature is Wordsworth's inspiration and relates to it as God. In his poems he shows us how nature is misunderstood and misused. It's a place where you can just sit down and observe the beautiful scenery. R.S.Thomas shows his love for nature but then he describes ways in which people use it, even if they notice it or not. Both poets write about how things have changed in their time. They reflect on the impact of nature and how humans should be inspired by nature. They also show the good and bad impact of mankind, how we treat nature. ...read more.