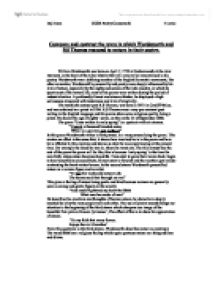 Compare and contrast the ways in which Wordsworth and RS Thomas respond to nature in their poetry.

Compare and contrast the ways in which Wordsworth and RS Thomas respond to nature in their poetry. William Wordsworth was born on April 7, 1770 at Cockermouth at the river Derwent, in the heart of the Lake District that will come to be immortalised in his poetry. Wordsworth was a defining member of the English Romantic movement; like other romantics, Wordsworth's personality and poetry were deeply influenced by his love of nature, especially by the sights and scenes of the lake country, in which he spent most of his mature life; most of his poems were written during the period of industrialisation. A profoundly Ernest and sincere thinker, he displayed a high seriousness tempered with tenderness and love of simplicity. The twentieth century poet R.S Thomas, was born in 1913 in Cardiff Wales, and was ordained as a priest in 1936. R.S Thomas was a very pre-eminent poet writing in the English language and his poems show some religious quality, being a priest. He died at the age of eighty- seven, on the on the 25 of September 2000. The poem "Lines written in early spring" is a quatrain with six stanzas. ...read more.

A few lines above Tintern abbey is also another poem written by William Wordsworth. The poem does not have any particular structure, it is written in blank verse; he redefined poetry as he was the first to use this particular style. From the beginning of the poem he shows his naivety about nature, he had little about nature but was attracted to it 'haunted me like a passion'. "their colours and their forms, were then to me An appetite; a feeling of love." This illustrates that he cannot do without nature. He found joy in nature but didn't understand it; he developed the sense of joy by describing the setting sun and living air. As he grew up he began to find other interests in nature and became interfused with it, he described nature as something transcendent and above ordinary. In both "Lines written in early spring" and "A few miles above Tintern Abbey". Wordswoth talks about nature and its divine quality; he shows his attraction and involvement in nature by the use of quotations, metaphors, alliteration, assonance and repetition to emphasise on thoughts; for example: "What man has made of man!" He uses this quote twice in his poem to focus our thoughts to the way people treat each other and he also illustrates that man is part of nature's divine plan. ...read more.

The to poems talk about farmers who are dedicated to their jobs and are not concerned about anything else, they feel the soil means everything to then, in cyndyllan case, the tractor as well. R.S Thomas uses religious imagery in his poems. The sun comes over the tall trees "Kindling all the hedges" This gives a religious image of candles being lit; the sun is the light on the candle and the tree is the candle. The two poets William Wordswoth and R.S Thomas have conflicting ideas. Wordswoth shows his love of nature in his poems, relates to senses sight and sound and how we experience the world through the senses. Moreover he shows that nature runs through us, and sometimes we are not aware of it, especially when we are younger. Cyndyllan is not interested in nature but his job, and his relationship to his tractor; this is an idea you wouldn't get in Wordswoth. To Cyndyllan nature is about soil and his work. "And all the birds are singing, bills wide in vain". The similarity between the two poets is they both talk about nature in their poems but from different perspectives. Cynddylan on a tractor appeals to me the most because it's more original, relating to the modern world we live in, where machines do most of the jobs. Deji Esan GCSE Poetry Coursework 5 Lewis ...read more.