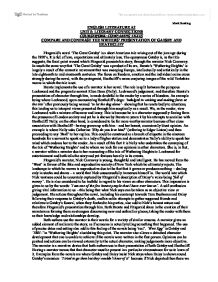 Compare and contrast the writers' presentation of Gatsby and Heathcliff.

ENGLISH LITERATURE A2 UNIT 5: LITERARY CONNECTIONS COURSEWORK: COMPARING TEXTS COMPARE AND CONTRAST THE WRITERS' PRESENTATION OF GATSBY AND HEATHCLIFF Fitzgerald's novel 'The Great Gatsby' is a short American tale arising out of the jazz age during the 1920's. It is full of love, expectations and ultimately loss. The eponymous Gatsby is, as the title suggests, the focal point around which Fitzgerald presents his story, through the narrator Nick Carraway. In much the same way that 'The Great Gatsby' was a product of its era, Bronte's 'Wuthering Heights' is largely a result of the romantic movement that was sweeping Europe, intellectually and artistically in the late eighteenth to mid nineteenth centuries. The focus on freedom, emotion and the individual come cross strongly during the novel, with the protagonist, Heathcliff's name conjuring images of the wild Yorkshire moors in which the tale is set. Bronte implements the use of a narrator in her novel. The role is split between the pompous Lockwood and the pragmatic servant Ellen Dean (Nelly). Lockwood's judgement, and therefore Bronte's presentation of character through him, is made doubtful to the reader by a series of blunders. An example being where Lockwood, upon encountering Heathcliff's dogs: 'indulged in winking and making faces at the trio' after previously being warned 'to let the dog alone'- showing that he reacts badly to situations, this leading us to interpret views presented through him sceptically as a result. We, as the reader, view Lockwood with a mixture of humour and irony. This is because he is a character supposedly fleeing from the pressures of London society and yet he is shown by Bronte to yearn it by his attempts to socialise with Heathcliff. Nelly, on the other hand, is considered to be far more worthy narrator because of her close association with Heathcliff - having grown up with him - and her honest, occasionally blunt opinion. ...read more.

The house is seen to be empty, both of purpose and of Daisy. Without Daisy, and with Gatsby's death, the house loses all significance. This emptiness is retrospectively emphasised with the reader's memory of Gatsby's vast parties. It is also partially due to the emptiness that we fully realise the 'colossal nature of his dreams'. The size of the house is symbolic of the size of his dream and also of just how far he came in his pursuit of Daisy. Its emptiness is also representative of the fact that Daisy moved on, whilst Gatsby didn't. It could therefore be argued that he was destined to face tragedy as Daisy could never live up to the faultless, perfect model Gatsby constructed in his mind. Fitzgerald, in a similar fashion to Bronte, uses Pathetic fallacy; although his use is more to create atmosphere rather than posit character traits. At the reunion of Gatsby and Daisy in Nick's ramshackle house, the rain prior to the meeting and the subsequent change of weather to sunshine highlights the trepidation experienced beforehand and the jubilation afterwards where Gatsby 'literally glowed'. The central romantic image of the novel, where Gatsby kisses Daisy on a night 'white with moonlight,' is another example of pathetic fallacy. The white here symbolising the purity of Gatsby's love for Daisy. The 'broiling' day of the confrontation between Gatsby and Tom is a further use of pathetic fallacy, where the stifling heat creates a tense atmosphere for the suppressed emotions held to break free. Both Fitzgerald and Bronte use contrast with other characters in their presentation of Gatsby and Heathcliff. In Fitzgerald's 'The Great Gatsby' the evident contrast is between Gatsby and Tom Buchanan; two very different men whose only thing in common is their love for Daisy, although this is doubtful in the case of Tom because of his promiscuity. He has a 'woman', Myrtle in New York, and self-confesses that 'once in a while I go off on a spree'. ...read more.

This quote gives us an insight into Heathcliff's nature as a 'poison' that could corrupt any person, even if they are 'virtuous'. Bronte further explores Heathcliff's personality in this confrontation when Heathcliff retorts that Cathy's 'lamb' (Edgar) is 'in danger of splitting its skull against my knuckles' - demonstrating Heathcliff's violent and passionate nature. This confrontation also serves to demonstrate Bronte's use of narrative device in having the narrator, Nelly, present in major events of the novel as when she is asked to fetch assistance for Edgar, she is thwarted in leaving by Cathy. It is in this episode that Bronte presents the characteristic among Heathcliff's traits of him being a corrupting influence. It is Heathcliff who is usually associated with violence but during this incidence it is Edgar who strikes Heathcliff 'full on the throat a blow that would have levelled a slighter man.' Both Fitzgerald and Bronte use confrontation as a means to develop Gatsby and Heathcliff's character. In conclusion both Bronte and Fitzgerald use a variety of techniques in their presentations of Gatsby and Heathcliff. Despite the fact that both novels were written centuries apart there are many similarities in the author's presentation. On the other hand the periods in which the novels were written come across evidently such as the Romanticism influences in 'Wuthering Heights' and the insights into the jazz era in 'The Great Gatsby'. Gatsby is presented to be a character of noble heart, almost too good for the society into which he raises himself up to and who is ultimately, and tragically, destroyed by it. Heathcliff is presented as a 'tyrant', capable of cruelty and malice that is balanced out by the overwhelming grief experienced by him. Central to both novels is the theme of love and the immense acts of human ability and suffering that can stem from it. They also explore love as an all-consuming force that can act as, in Gatsby's case a reason for living and bettering himself, or in Heathcliff's case a reason for dying. Mark Hosking ...read more.