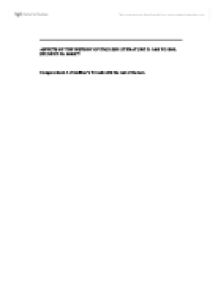 Compare book 4 of Gulliver's Travels with the rest of the text.

ASPECTS OF THE HISTORY OF ENGLISH LITERATURE II: 1600 TO 1800. STUDENT ID: 0400077 Compare book 4 of Gulliver's Travels with the rest of the text. Jonathan Swift "Gulliver's Travels"an elaborate concoction of political allegory, moral fable, social anatomy, and mock Utopias set within a parody of both travel fiction and journals of scientific exploration.i It did not immediately receive the attention it deserved, however; it first became a children's favourite because it was so well written. This pleasing facade is merely the mask for a sustained satiric assault.ii Swift knew that people would "see everyone's likeness but their own"iii in this glass, so he wrote the character of Gulliver in a certain way in order to prevent the writing off of his actions as quirks. Gulliver visits four different societies in his travels and upon his return home at the end by the end of book 4, Gulliver's character is irreversibly changed He cannot stand the sight, smell or ways of humans. The fact that he has changed so much by the end makes one think that maybe humans could be as great as the houyhnhnms, but it is not in their nature, as we have already seen throughout the book. As soon as he return to England, however, he has already lost some of his virtue. He despises his wife and cannot deal with the idea that he fathered children on the yahoo race. ...read more.

The inhabitants of this third island, the Laputians, only work with mathematics and science. They are always lost deep in thought and come up with incredibly useless theses and inventions to no one's advantage. At one point, Gulliver is being shown a classroom by a professor. He sees students laboriously turning handles and writing sentence fragments, hoping to create thought-provoking sentences.xi The professor tells Gulliver that by this technique '"'the most ignorant person at a reasonable charge, and with little bodily labor, may write books in philosophy, poetry, law, mathematics, and theology, without the least assistance from genius or study." It is thought that Swift was satirizing the followers of Ramon Lull, who had been rediscovered in the late 17th century.xii Swift is, in general, satirizing the philosophical movements of the 17th and 18th centuries; he is ridiculing the idea of overthinking everything.xiii The fourth book is perhaps the most important. The Houyhnhnms are extremely rational horses that co-exist with entirely irrational human-monkey hybrids known as Yahoos. Swift uses the conflict between the actions of these two species to set forth the fact that humans tend to describe themselves in terms of Houyhnhnms but act more like Yahoos. This book deals with more philosophical issues such as the nature of man's thought and the purpose of living. Again, Swift allows Gulliver to reveal the characteristics of Europeans. The reply he receives from the king of the Houyhnhnms is crushingly unflattering: "... ...read more.

xiv Plato's cave: ''In the allegory, Plato likens people untutored in the Theory of Forms to prisoners chained in a cave, unable to turn their heads. All they can see is the wall of the cave. Behind them burns a fire. Between the fire and the prisoners there is a parapet, along which puppeteers can walk. The puppeteers, who are behind the prisoners, hold up puppets that cast shadows on the wall of the cave. The prisoners are unable to see these puppets, the real objects that pass behind them. What the prisoners see and hear are shadows and echoes cast by objects that they do not see. Such prisoners would mistake appearance for reality. They would think the things they see on the wall (the shadows) were real; they would know nothing of the real causes of the shadows. We may acquire concepts by our perceptual experience of physical objects. But we would be mistaken if we thought that the concepts that we grasp were on the same level as the things we perceive.'' Marc Cohen, Allegory of the Cave, March 2001 <http://faculty.washington.edu/smcohen/320/cave.htm> (3 June 2002), Washington xv It is important to note that this is not an uncommon outcome to such a journey: the central character, once a recognizably typical representative of his culture, has gone through a transformation which leads him to reject that culture in a way that his contemporaries do not understand: Marlow (in Joseph Conrad's Heart of Darkness) takes to the sea for the rest of his life; Yossarian (in Joseph Heller's Catch-22) sets out in a rubber raft for Scandinavia. ?? ?? ?? ?? 5/8/2007 1 ...read more.