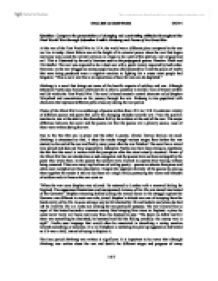 Question: Compare the presentation of changing and contrasting attitudes throughout the First World War through Sebastian Faulk's Birdsong and Poems of the Great War. At the eve of the First World War in 1914, the world was a different place compared to the one we live in today. Great Britain was at the height of its colonial power when the war first began and many men joined the military services in a hope to be a part of this patriotic war of good and evil. This is illustrated by the early literature such as the propaganda poems Flanders Fields and The Soldier. The war was expected to be a short one with a quick victory expected by both sides. However, as the war dragged on many people became disillusioned by it and the pieces of works that were being produced were a negative reaction to fighting for a cause most people had forgotten. "This is not a war this is an exploration of how far man can be degraded." Birdsong is a novel that brings out some of the horrific aspects of soldiery and war. Although Sebastian Faulks uses fictional characters he is able to construct a realistic view of trench warfare and life within the First World War. The novel is based around a central character called Stephen Wraysford and concentrates on his journey through the war. Birdsong is also populated with characters that represent different parts of society during the war period. Poems of the Great War is an anthology of poems written from 1914 to 1918. It contains a variety of different poems and poets that cover the changing attitudes towards war. From the positive reaction to war at the start to the disenchant felt by the soldiers at the end of the war. The major difference between the novel and the poems are that the poems are a primary source, most of them were written during the war. ...read more.

This supports Stephens attitude in Birdsong that he is not fighting for "the living at home". The lines: "Take up our quarrel with the foe: To you from failing hands we throw". Supports the view held by Sebastian Faulks that the dead cannot be forgotten but this attitude is not entirely supported by McCrae. In his poem McCrae states that the dead want their death's to be justified by prolonging the war. This means more men must kill and die. If this does not happen the dead "shall not sleep." It is easy to miss the repetitive summons of revenge when the enemy is more poetically referred to as the "foe" and the battles linked with heroic long distance runners with a dedication to a worthy cause. The phrase "break faith" creates a dreadful bond that demands death for the dead. This attitude was commonly linked with high-ranking generals and officers who saw the soldiers as mere numbers that were expected to die for the war. "It was not his death that mattered; it was the way the world had been dislocated. It was not all the tens of thousands of deaths that mattered; it was the way they had proved that you could be human yet act in a way that was beyond nature". As the war went through stages so did the attitudes of the soldiers. The final stage for many men was the loss of purpose of the war. This stance was dangerous because if they believed that, then their "lives lost meaning long ago." This is Stephens's final reaction towards the war. The tone and context of Stephens's admission does not sound as if he has said it in desperation but as if he has come to the conclusion after careful consideration. This is what Faulks means when he states "beyond nature". This war was unnatural and the needless deaths of the soldiers were not "for their children" but due to the greediness of certain countries. ...read more.

The poem is about a soldier writing to his wife whilst trying to stay cheerful but in the end is unable to keep the fa�ade up and hands his letter to friend to write. Owen splits the poem into two different aspects; what the soldier is writing and a conversation he is having with a fellow soldier whilst writing. His written and spoken words are shockingly dissimilar. The tone of his letter is formal but his speech is idiomatic in its harshness. "Oh blast this pencil. Ere, Bill lend's a knife" I'm in the pink at present, dear." Owen because he is writing poetry, cannot have a broad overview of characters that Faulks has, who is able to develop them through the novel. However Owen still shows that the writer is well aware that the situation was of constant danger within the poem. "Never fear. (VRACH! By crumbs, but that was near)". Owen uses parenthesis throughout the poem to commentate on the actual events of the war, interrupting the writing of the letter. The rhyme scheme continues to remain constant despite this, showing the soldiers desire to write in a positive attitude regardless of what was happening around him. Owens's use of the letter is more effective than Faulks as it shows how much the soldiers had to detach themselves from their surroundings whilst writing home. Poems of the Great War and Birdsong, in their different ways, highlight how, many soldiers were forced to change their attitudes towards the war due to its wastefulness. The change in approach was not due to one particular aspect of the war but instead a series of events that led to many soldiers becoming disheartened. Poets such as Wilfred Owen blamed the media and the ignorance of the civilian population for the prolonging of the war. Yet in Birdsong, Sebastian Faulks describes the change in attitude towards the war as something due to an experience that nobody would understand, unless you were one of the thousands of soldiers at the front line. ?? ?? ?? ?? ENGLISH COURSEWORK UNIT 5 1 of 8 ...read more.